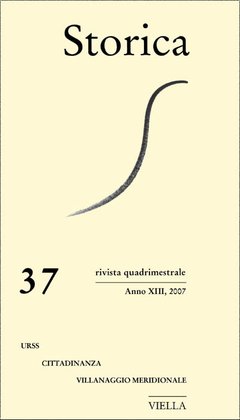 Hemispheres of Citizenship
In the early years of the nineteenth century, after the abdication of the King, the colonial territories of Latin America began to detach themselves from the Spanish Monarquía Catolica. A slow process of appropriating sovereignty began; it, however, did not coincide with the abandonment of the culture and political traditions of the mother country. The Latin American population’s first modern constitutional experience was in fact with the so-called Constitution of Cadiz, promulgated between 1812 and 1814. The essay reconstructs the history of this constitutional document, which was adopted in the majority of the formerly Spanish territories: it was the origin of important political conquests, but also of prejudices and of obstacles to a democratic conception of citizenship that separated, more than it united, Spain’s «two hemispheres».

The Serfs’ Liberties. Reinterpreting Southern Italy Villeinage
This essay examines the conditions of Italian peasants in the South and Sicily (1050-1250). Historians have for some time maintained that the majority of peasants were Villeins deprived of freedom. The analysis of the obligations imposed by the lords, of social representation, and of the legislation of the Norman monarchy instead demonstrates how the notion of Serfdom obscures a much more complex reality. Peasant dependency appears to be characterized by multiple conditions, differing by region and in continuous evolution. Local communities, monarchical politics and the nobility elaborated complex representations of peasant dependence that cannot be adequately formulated under the labels of Serfdom or Servitude.

«What is the USSR?». Interpretations, Historiographies, Mythologies
This essay is a slightly modified version of the first part of the Questions and Débats section of the history of the Soviet Union that the author is preparing for the Presses Universitaires de France’s collection Nouvelle Clio. It focuses on the evolution of the debate on the «nature» of the Soviet system, from 1917 to the USSR’s collapse. Interpretations and historiographical disputes are given prominence, but mythologies are also considered, as well as the motives behind their appearance and evolution.

Urban microcosms. City and Nationalisms in middle eastern Europe
Through the history of four cities – Thessaloniki, Vilnius, Leopoli, and Breslau – this essay discusses the problem of the relationship between cities and nationalisms in Europe’s twentieth century, demonstrating how the rise of the latter and its often violent interaction with the former irreversibly changed the human and cultural face of the urban centers taken into consideration, which represent a concrete example of the phenomenon of an un-mixing of people characteristic of twentieth century European history.