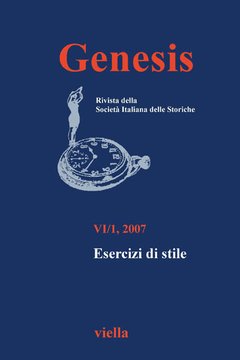 From the “scuola storica” to the “scuola normale”. Maria Romano Caught Between Scientific Research and the Dramatic Representation of the Nation’s History.
With a degree in Literature in 1892 from Turin University, Maria Romano was enrolled in a female Teacher Training School. Her patriotic work during the Great War provided her with an opportunity to pursue a didactic proposal centered around the storiographic canon she had acquired. She used this to vehicle, through the theatre, a gender reading of Italian history, where the King was the father of the nation, composed of soldiers, exiles, volunteers and women. Her writings describe the war as well as medieval events, albeit strongly tainted with events of the times. Romano continually focuses on gender roles and, together with her students who acted out these parts, she elaborated a 19th century gendered nation in keeping with the Risorgimento. tradition to which she was closely tied. All throughout the war Romano and her students received letters from soldiers at the front. These were used as a source by Romano and transposed into her theatrical writings, providing an original representation of women at war.

«Un modello perfetto quale all’età nostra fa d’uopo». Female Holiness and Cultural Models at the Beginning of the 20th Century
The essay analyzes La vita di Santa Melania Giuniore (The Life of Saint Melania Giuniore), written in 1909 by Elena Da Persico, which represents one of the five hagiographies written by women in the first decade of the 20th century. Compared to writings from the 19th century, Da Persico places Melania's experiences in the context of her time and, through the use of historical and archaeological sources, highlights even the most controversial aspects of her life, the ones that are less tied to traditional examples of female holiness. In her writing, Da Persico combines religious themes with patriotic references, and interprets them according to her female subjectivity. By doing so, she builds a new model of sanctification for Catholic women, who were actively involved in the Christian winning back of society. Da Persico's writing is even more original if compared to the coeval biography of Saint Melania, published by George Goyau in 1908. The two texts are apparently similar – they are both based on Cardinal Rampolla's studies, published in 1905, and both have a historical dimension and a moral message. However, the intentionality of Da Persico emerges from the importance assigned to subjectivity, and from the process of identification between the biographer and her subject.

Women Scholars and Writers of Science between the Liberal Age and Fascism. The Bottero-Magistrelli Case
This article reconstructs the careers of Evangelina Bottero (1859-1950) and Carolina Magistrelli (1858-1939), placing them in the context of the access of women to science higher education in Italy. In 1881 Bottero and Magistrelli graduated at the University of Rome, first women to get a university degree in science in Italy. In 1883 they wrote together a book on the telephone. In the following years, Magistrelli continued to publish science text-books, and in 1886 she wrote a pamphlet on “women emancipation”. In 1882, they were hired at the Istituto Superiore Femminile di Magistero (Female Institute of Higher Education, ISFM) in Rome, where Bottero taught physics and chemistry, and Magistrelli natural sciences. In 1890 Bottero and Magistrelli were the first women in Italy to obtain a tenured professorship in an institution of university level. After several decades, their brilliant carrier at the ISFM ended suddenly in 1923. During the first Mussolini Government, the reform of education launched by Giovanni Gentile changed many things within the ISFM, with dramatic effects on the carriers of Bottero and Magistrelli. The reform of the ISFM – that in 1935 will become the Faculty of Education (Facoltà di Magistero) – sanctioned the admission of men and the expulsion of the sciences.

Smuggling culture. Lavinia Mazzucchetti and German literature in the interwar period
One of the first Italian women to become a member of Faculty, Lavinia Mazzucchetti (1889-1965) was libero docente and docente incaricato for German Literature from 1917 to 1929. She also cooperated with several renowned publishers, as well as with the Enciclopedia Italiana under the direction of Giovanni Gentile. Work on Stefan Zweig’ and Thomas Mann’s masterpieces ensured her acclaim as a translator. Her antifascist stance was reflected in her critical works and she showed a particular regard for fiction targeted at women and children. She followed her own particular version of the European canon, closely related to her family legacy as well as with her experience of both the limits and the wealth offered by Italian and German literature.

From Biography to History and back: Iris Origo between Bloomsbury and Tuscany
An independent scholar of Anglo-American background, Iris Origo (1902-1988) lived and wrote in Italy. She is remembered as the author of several biographies, as well as of a pioneering volume of social history, The Merchant of Prato (1957). Based on her unpublished papers and correspondence, this essay tries to reconstruct her intellectual profile and to assess her contribution to 20th-century historiography. In The Merchant of Prato Origo creatively applied to history the “New Biography” model advocated by key figures of the Bloomsbury circle, such as Lytton Strachey and Virginia Woolf. Her case suggests that we may have overestimated the role of the French «Les Annales» School in the renewal of 20th-century historical writing. In fact, Origo’s innovative approach to the history of the family, marriage, and women did not derive from «Les Annales» but was inspired by new trends in English historiography, in particular by the work of Eileen Power on social history and women’s history, and, more generally, by Bloomsbury’s critical revision of late Victorian cultural standards.