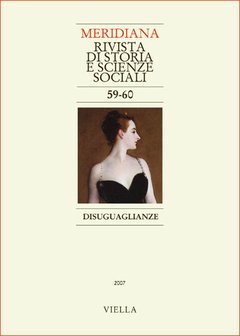 In defence of equality
Taking as starting point Krugman’s thesis on the weakening of egalitarian social norms as a cause of today’s growing income inequality, the article aims at pinpointing the force of the egalitarian argument, even assuming a liberal perspective sensitive to freedom, responsibility and incentive-compatibility. To this purpose, it reviews the three main families of theories developed from such a perspective, namely, equality of resources (in the rawlsian as well as in the left-libertarian and dworkinian versions), luck egalitarianism and equality of capabilities.

Economic growth and income distribution: what economists say
This paper reviews the literature on the interplay between growth and personal income distribution. After reviewing some major contributions, it concludes that the empirical approach is still lacking in explaining some crucial questions related to the dynamics and other distinguishing features of the income distribution, both at world and country level. It concludes with some insights for developing theoretical models able to account for the richness and complexity of the topic.

The interdependence between personal and functional income distribution: the European case
During the last decades the most advanced European countries (EU-15) have experienced a parallel evolution towards a fall in the labour share and a rise in the wage inequality. A common consequence of these trends was to mainly hit the low-skill workers’ wages and jobs. This outcome, however, should not been attributed only to harsher competition in international markets. This paper highlights that the slight recovery of the labour share which has occurred at the turn of the century in some EU-15 economies should be traced back to reforms in the labour market and in welfare benefits. The institutional constraint impinging on the technological choices of the firms was lessened, and the employment rate thus increased.

Technology, trade and inequality in Europe
Technological change and international trade have changed the structure of advanced economies, the patterns of demand for labour, the distribution between wages and profits and within wages, resulting in greater polarization and inequality. The article provides a review and original evidence on the mechanisms that have linked innovation and trade to inequality, considering the role of different technological strategies and patterns of international integration across industries. The increase of inequality is assessed in terms of the relative growth of wages and profits, on the polarization of the employment structure on the basis of skills, and on the polarization of wages.

Tendencies in income distribution and the crisis of the middle-class in Italy: perception or reality?
The aim of the paper is to assess distributional changes occurred in Italy in the last thirty years, focusing in particular on the last decade. Computations are based on Bank of Italy’s Survey of Households Income and Wealth and are aimed at drawing a consistent picture of the major distributional episodes around three main issues: income inequality, poverty and mobility. Although most of synthetic indices show limited changes along the last decade, the use of alternative non-static tools such as transition matrices reveal a significant downward mobility for the middle and the upper-middle quantiles, which is also associated to a higher persistence for the bottom part of the distribution. These findings suggests that, in absence of a «risk premium» due to poor growth performances, the greater uncertainty and the risk-shift caused by recent reforms being extremely relevant in explaining the puzzle between the empirical evidence of stability in distributional indices and the feeling of impoverishment experienced by Italian households.

Poverty in Italy and Europe: the phenomenon, its characteristics and new trends
Using Istat and Eurostat data, the paper analyzes, first of all, the incidence of poverty in Italy and in European Union in recent years, focussing also on child poverty. The data show that in Italy, both general poverty and child poverty reach very high level, even though differences between the North and the South are sharp. The main family characteristics responsible for a higher risk of poverty are also reviewed, among with the number of family members, especially if they include children or elderly, is prominent. In the last part of work, an econometric test is performed to reach the conclusion that the chances for young graduates to avoid poverty after 2 or 3 years from the degree have significantly increased in the last decade in Italy. This seems particularly worrying in the light of the importance usually attached to human capital as an anti-poverty policy.

The super-rich and the income inequality: the evolution of top incomes in the West in the last century
The aim of this work is to explore the wide and «take off» literature on empirical evidence about top incomes shares series over the 20th century in several countries. Despite the methodological differences due to the availability of data (tax returns), the findings of the recent studies on the upper tail of income distribution are similar for most of the countries analyzed: they show indeed a common pattern of pronounced decline in top incomes in the first half of the century – mainly due to shocks on capital incomes engendered by the two World Wars and the Great Depression – with no recovery in the following decades, probably owed to the introduction of mass progressive tax schemes. Since the half of the 1970s, however, top income shares in English-speaking-countries – unlike continental Europe series – have shown a quite substantial increase. This dramatic surge in income concentration – maybe linked to fiscal and redistributive policies adopted after the political conservative turn in the USA and the UK – appears to be mostly referable to a marked rise in top wages probably resulting from a new labour market order led by a mix of technological and fiscal changes coupled with the emerging of a new corporate governance class (i.e. the CEO). Factors other than technology such as social norms are proposed to account for the observed facts, rising doubts on the technical change view of inequality in the long run.

Welfare State and redistribution: the role of universalism and targeting
Notwithstanding many theoretical contributions, few studies have so far analyzed in quantitative terms the link between Welfare State and redistribution. Besides, such studies have many methodological shortcomings, concerning both how redistribution is computed and how Welfare State features are synthesized through indexes. After having described the trend of inequality in the last twenty years in the developed countries, in the first part of the paper we will critically review such shortcomings. Then, we will focus on one of the most crucial dimensions of welfare systems, i.e. the choice between universal or targeted schemes, and, surveying the existing literature, we compare the pros and cons of both schemes and their impact on inequality and redistribution.

Fathers and sons education levels: the persistence of inequality
The paper deals with the problem of intergenerational transmission of inequality and in particular with the persistence of education attainments through generations. In the first part of the paper an empirical analysis of the phenomenon at world level is carried out, coming to the conclusion that, despite national differences, persistence of education levels is a widespread and serious phenomenon. With specific reference to Italy an original empirical analysis is carried out, which allows to get a rich picture of the intensity and manifestation of this form of inequality persistence. In the second part of the paper an attempt is made to identify the main factors responsible for the observed tendencies and a theoretical scheme is proposed for classifying such factors and also for distinguishing more clearly between social mobility, equality of opportunity and intergenerational transmission of advantages and disadvantages.