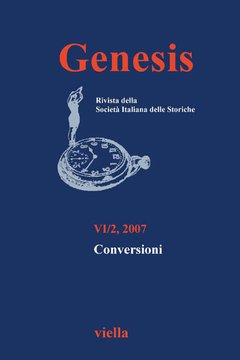 Another Religion, Another Life. From Jewish to Christian in Castille at the End of Medieval Times
This work tries to approach the feminine identity across the study of religiousness. There is analyzed the case of the Castilian “judeoconversas” in the step of Middle Ages to Modernity. They were women who had experienced a religious conversion, or that had grown in the bosom of families shaken by this phenomenon, so for them the religious practices made a very special sense. This is like that so much in case of those who were sincere Christians (bound to realize a continuous ostentation of their firm adhesion to the faith newly embraced) as in that of criptojews (involved in illicit practices, which had to be supported in the most rigorous secret).

«My Conversion Was Wonderful»: Testimonies of Conversion in Radical English Churches of the Mid-17th Century
In mid-seventeenth-century England, a number of accounts of spiritual experiences appeared almost simultaneously, collected and edited by the ministers of the Independent congregations. Taken together, these collections alone brought more than a hundred first-person narratives to the public, most of them by laypeople raised in a Protestant milieu. The narratives record a great variety of spiritual experience and show the centrality of conversion in the believer’s life. The purpose of the narratives, which qualified the individual for formal inclusion in the Church of Visible Saints, was to give the congregation a spoken account of the experience of conversion. Though following an established set of conventions, these accounts also portray and reveal those aspects of experience that have profound meaning for converts. This essay explores the interplay between the foreordained pattern and the believer’s own personal concerns and it endeavours to highlight how this interaction is gendered. Though it is risky to make generalizations in comparing women’s and men’s narratives, the accounts show that gender plays a role in specific areas of experience and in those events which were later perceived as crucial to the individual believer’s progress towards spiritual grace.

A «New World»: Conversion and Mystical Writing in 18th Century Catholic Italy. Caterina Biondi’s Compendio
In modern times, many devout Catholic women, following their father confessors and spiritual fathers, wrote a series of conscience reports and papers, in which they were required to describe in detail their souls, thus exploring their interior lives, at times moving backwards following their memories. These writings were often structured as stories of conversion, and revolved around a devout woman’s journey from a situation of sin to a new state of interior grace, according to ways and models that were corroborated by the ecclesiastic authority. Such an investigation was functional to the pursuit of spiritual control and guidance. Yet, they also offered the penitent opportunities of subjective reflection, personal growth and development, leading to unforeseen outcomes. This is what happened in the case of Caterina Biondi, who is the object of this essay. Caterina Biondi lived in Florence between the end of the 17th century and the mid-18th century, and was tried for “feigned sanctity”. My essay analyzes the forms of “conversion,” and attempts to highlight the tensions between the writer’s subjectivity and her willingness to conform to the models and schemes that were offered and imposed by her spiritual directors, who were in charge of guiding her toward perfection.

Conversion, Apostasy and Martyrdom: the Case of Sol Hatchuel
This article discusses the concept of conversion, apostasy and martyrdom in the story of Sol Hatchuel, a young Jewish girl who was executed in Fez in 1834 after neighbours testified that she had converted to Islam. Texts recounting Sol’s story in Judeo-Arabic, Hebrew, Judeo-Spanish, Spanish and French are compared. Each set of texts, while recounting the same historical events, tells the story according to the literary, religious and political perspectives of the different authors and audiences. Gender discourse, religious polemics, and, in the case of the European texts, colonial discourse are incorporated in the retelling of Sol¹s story. In addition, this story shows that for certain groups conversion, apostasy and martyrdom are often interconnected.

The Conversion of Elisabeth Gnauck-Kühne to Catholicism at the Beginning of the 20th Century
The main focus of the article lies on the conversion of Elisabeth Gnauck-Kühne (1850-1917) from Protestantism to Catholicism in the year 1900. The Catholic Church’s confrontation with individuality, in particular, demanded answers to the questions of how modern people can reconcile their roles as believers, family members, workers and citizens. To answer the question what a change of faith means for the converts, the article looks not only at the reasons of the conversion, but also at the lifestyle, activities and networks before, during and after the conversion. As the example of the convert Elisabeth Gnauck-Kühne shows, the strong arguments provoked in Germany by conversions to Catholicism even near the end of the 19th century did not necessarily lead to a clear demarcation from their former religious community, the Protestants. While the reactions to the conversion of Gnauck-Kühne revealed the explicit separation of the German society into a Protestant and a Catholic camp, Gnauck-Kühne, in her life and struggle for a more equitable world and for a better social position for women, tried to connect the reform agenda which she had developed in the context of Protestantism, with the needs of the Catholic world which seemed more attractive for her around the turn of the century.