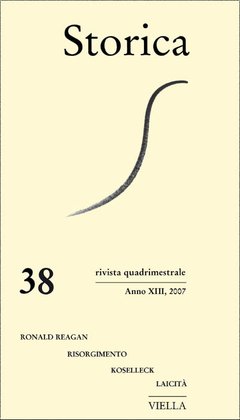 «Morning in America»: Historians discover Ronald Reagan
Many books on the administrations of Ronald Reagan, on their foreign as well as domestic policies, have been published in the past few years. The interest of historians for Reagan and Reaganism is finally permitted by a greater historical detachment but stems also from the inclination of many to use Reagan and his legacy in the recent bitter debate among US conservatives. These new scholarly works have many merits, and offer a more complex and nuanced picture of Reagan’s policies and their consequences. We are, however, still in an infant phase, which suffers from a paucity of primary sources, particularly for what concerns foreign policy issues.

To Deliver a Greatly Persecuted Church : Resituating the Edict of Nantes within the History of Laïcité
Brian Sandberg

«To Deliver a Greatly Persecuted Church»: Resituating the Edict of Nantes within the History of Laïcité A decade ago, France celebrated the 400th anniversary of the 1598 Edict of Nantes, a royal act that traditionally has been seen as ending the French Wars of Religion and ushering in the earliest form of reli- gious toleration in Europe. Recent research instead envisions the edict as an only partially implemented religious peace. Rather than securing an early form of toleration for French Calvinists, the edict formalized and legalized the contradictions between religious universalism and personal conscience that would later become elaborated in the concept of laïcité.

Time and Historical Experience. Remarks on Koselleck’s Historik
Moving from Koselleck’s most recent essays on Historik, the author explores the role played by historiography in the constitution of historicity as a peculiar experiential dimension of human existence. The essay focuses on the complex link between difference and repetition which, according to Koselleck’s theory of experience, constitutes a «specific historical temporality» and its inner articulation. Actually, it is by exploring the «formal temporal structures» which constitute the horizon of historical intelligibility that Koselleck brings to light the decisive role that the point of view of historiography has for the constitution of man as the subject of historical knowledge and action. It is difficult to ignore the importance of this theory of historical temporalization in an age in which the End of History rhetoric tends to transform itself in a sort of media gospel.

The new history of Risorgimento: a view from abroad
This forum aims to reflect on recent approaches to the Risorgimento and Italian nationalism, and is especially concerned with the work of Alberto Banti on the origins and appeal of the nation. It also hopes to stimulate further debate about the possible course of new research. Each contributor addresses a different set of problems and themes. Lucy Riall and Axel Körner focus on theoretical and methodological issues about the appeal and reception of the nationalist discourse: Riall questions Banti’s definition of the Risorgimento as a «mass movement» and outlines some difficulties with Banti’s approach to the study of political emotions, while Körner raises methodological questions regarding the aesthetics of reception. Maurizio Isabella suggests that Banti’s emphasis on emotions and political «style» risks excluding the intellectual project which lay behind the participation of many patriots in the political struggles of the Risorgimento. Catherine Brice uncovers the political concerns within Banti’s culturalist approach, and suggests a direction for future research on the relationship between politics and culture. The forum concludes with a response from Alberto Banti.