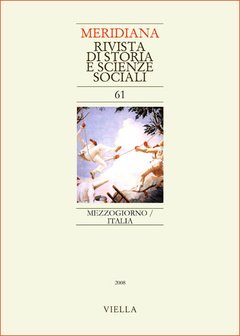 The coining of social capital. The «questione meridionale» after «meridionalism»
This paper argues that the representation of the Italian Mezzogiorno conveyed by the debate on its economic backwardness is overtly unfaithful due to a series of reasons. Several positive aspects like the recent success in the fight against the Mafia, are systematically neglected. At a more analytical level the influence of the works by Putnam and Banfield on the lack of civicness and amoral familism have exerted a deep influence on the common sense view that the problems originate from the culture of the Mezzoigiorno and from the lack of a positive social attitude. The weakness of these two works and of the methodology on which they are based is highlighted. More in general, the concept of social capital is put under scrutiny and its limitations as well as its inadequacies in the interpretation of the Mezzogiorno are brought to the surface. An analysis which takes into account both positive and negative features in order to gain a better knowledge of the Mezzogiorno is strongly advocated.

A specific demography of the South. Does it exist?
Historical studies have always underlined deep differences in the demography of southern Italy respect to that of the northern and central part of the country. This paper is particularly interested in discovering if nowadays the Southern demographic dynamics are finally comparable with the recent evolution of the North and the Centre of the Peninsula. We examine specifically the different evolutions of mortality, fertility and family formation. The hypothesis is that beneath the similarities shown by the data there are economic and anthropological differences.

The economics of circulation. Ethnography of transnational trade in Naples
During the 1990’s, Naples has become an important market where North- African suitcase traders buy their goods. This paper aims to highlight some of the relationships between immigrants’ transnational entrepreneurship and the social and spatial organization of Naples as a marketplace. Moreover, the paper addresses some of the difficulties connected with research on circulations and informal economies and points at some possible research strategies.

Human capital in Southern Italy: a systemic approach to avoid the low development trap
The paper attempts to provide an explanation of the reasons of the qualitative and quantitative human capital weakness of in Southern Italy. Our analysis identify a low-skills low-quality trap generated by the interaction between supply factors – operating within the education system – and demand factors – located within the productive system. The paper, by considering the main theoretical and empirical contributions, develops a descriptive statistical analysis and an econometric model, which prove the existence obstacles on both supply and demand sides. Only a systemic approach can avoid traps and make development policies really effective.

Living «off» politics in the South of Italy
By analysing several significant phenomena of the social, political and institutional life of the Italian Mezzogiorno, this work aims to use the well known Weberian concept of living «off» politics in a different way from the usual one. Through this concept the German sociologist refers to people who get their sustenance and remuneration from political associations and institutions, while the paper applies the concept not only individuals and groups but to a whole society that depends upon politics for its working. The conflicts and contradictions that this imply – both today and possibly in the future – are highlighted in the paper.

How to sustain the development of southern regions. Or why we should not come back to the old category of «Mezzogiorno»
In the 1990s, southern regions showed new signs of dynamism. The «Italian model» based on local systems of small firms spread in some regions of the South. New forms of social and political mobilization also grew. In the 2000s, the expectations of a more stable and sound development were disappointed. The paper argues that this trend should not lead back to the old category of «Mezzogiorno», that is to the old idea that the South of Italy is a homogeneous backward area, and to old policies based on financial incentives to individual firms. It remains crucial to promote more effective policies aimed at improving the accountability of local political and economic leadership and increasing the supply of collective goods at a local level.

A new approach to the Policies for Italy’s Mezzogiorno
The paper critically assesses the policy known as «programmazione negoziata» which has been the dominant approach to the development of the Mezzogiorno over the last 10 years. There is general agreement that this policy has not delivered the expected results but there is no shared consensus as to the reasons of this failure. The paper provides a general scheme of analysis of such failure making a distinction between the basic view of what Southern Italy needs in order to develop, the institutional conditions necessary to make effective the measures suggested by the view and, finally, all what makes the actual policies to diverge, and even to conflict, with the basic view. This last element called «implementation inconsistency», as the paper shows, has been quite important in the case of the «programmazione negoziata». The paper concludes with some suggestions on how to reinforce the basic view of the problems to be tackled and how to tackle both the risk of institutional dysfunctionality and of inconsistencies in the implementation.