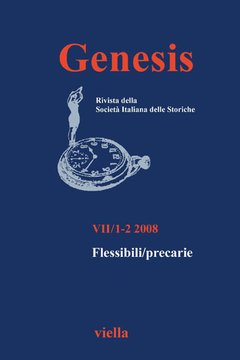 Differently Atypical. Inequalities of Gender and Costs of Flexibility
The article, on the basis of the analysis of institutional data and of the results of a qualitative empirical research, questions the argument that work flexibility releases individual and collective resources, encourages women’s occupation and broadens the possibility of choice for men and women, thus loosening the ascriptive influences. Flexibility seems to work as a further element of differentiation and discrimination between women and men, between the more and the less educated, between the upper and the lower classes. It seems to lead to adapting strategies that tend to limit aspirations to professional mobility, it induces to search for compensative securities in the family and in relationship models that are not open to innovation and risks, which naturally derive from it. Women are a sort of litmus paper, since they reflect the social and cultural consequences of flexibility. The ways in which this flexibility is accomplished, above all in some national contexts, like the Italian one, far away from the well known EU “flexicurity”, make women’s careers more difficult and uncertain, and make it harder for women to balance their family and their professional roles.

A Bunch of Years and a Triangle. Italian Feminisms’ Practices and Forms of Knowledge about Precariousness
A new generation of female workers is currently facing the consequences of flexibility, which accompany a postfordist economy: adjustment, suppleness, identification, in exchange for an uncertain promise of stability and betterment. The article examines the ways in which women have started to question their relationship with their jobs, with which they have a closer and less instrumental relationship than in the past, that often becomes difficult to manage. Their subjectivity is slow to emerge and is characterized by new questions and partial answers, by groups that recognize each other and discuss among themselves, using temporary tactics and lacking an overall strategy.

Inside, but Downside. Women in the Post-fordist Labour Market
The article deals with a series of social trends that seem particularly relevant for the study of women in the contemporary labour market, and devotes a special attention to Italy and Europe. Although this is a dominant theme of gender studies and sociology, the recognition of the ways in which gender inequalities are reproduced when women move from the school or the university into the labour market is largely overlooked. The theme of gender is easily accessed by examining the changes in occupations, but here considerable focus will be devoted to some seducing myths used by postfordist rhetoric: the idea, for example, that the gender pay gap, discrimination and segregation tend to slowly disappear as time goes by. Furthermore, female flexibility and job insecurity are examined through a critique of the idea that there exists a positive connection between the two elements. Along with the rise of a new form of essentialism in feminist studies, the final pages of this article challenge the rhetoric of a woman-friendly postfordist era.

Working from Home: Stories of an Unexpected Return
The purpose of the article is to reflect on the experience of working from home, an experience that has come back into favour through the increase in work flexibility. Described as “the domestication of work”, it is especially common in the daily experience of women whose professional life has followed non-standard routes, such as self-employed workers, project workers and freelance workers, who are constantly moving to and from between public and private workplaces. The article brings out the ambiguous and ambivalent nature of working from home, where ease and independence often come up against difficulties and fatigue. By analysing several short autobiographical accounts, the article describes and examines the strategies adopted by a group of women to organise their work within the domestic walls, while at the same time attempting to position it within the public sphere.

Precariousness in the French Department Stores
In analyzing the history of Lyon’s Gran Bazar between 1886 (when the store opened) and 1974, one notices not so much an increase in the precariousness of work, but rather a growing protection of labor on the part of the law. Precariousness was quite normal during the 19th century, since there was very little regulation and labour legislation was still in its infancy. During the 1970s, some jobs started to be defined as «precarious» (short-term and part-time jobs), as their existence was recognized by a series of texts (laws, for example) which offered some protection, although more limited than that offered to «stable» jobs. «Flexibility» thus became a managerial leitmotiv just when it became more difficult to legally introduce it, but it is far from a new concept or practice. Precariousness was the norm during the 19th century and it was not restricted to women. In the second half of the 20th century, on the other hand, precarious jobs in department stores were all female. This «feminization» of precariousness does not represent a constant and systematic phenomenon. During each phase and transformation of the law, the more protected jobs were not automatically reserved to men. Rather, various changes had to be put in place in the way in which work was organized (and it was always organized in a gendered way) in order for certain precarious jobs to be defined as feminine.

Women’s Work in a Silk Waste Factory of Briançon
The silk waste factory of Briançon was founded in 1842. It quickly became a large company and was one of the first European groups to produce silk waste. As many other textile companies, it was strongly feminized. However, women’s decision to work inside the factory needs to be analyed in the context of their multiple activities. Their work or their departure from the factory has to be understood in the context of family strategies of monetary contribution, and this was especially the case for Italian female immigrants.

Women’s Precarious Work in Preindustrial France: a Historiographical Debate
Women’s work was frequently precarious because it was considered unskilled; consequently female wage earners were treated as interchangeable, hired and fired at will. Historians have pointed to this employment flexibility in positive terms, underscoring its role in the family, but ignoring its effect on technical retardation or acceleration. This article surveys the historiography of women’s work to show how precariousness was integrated into theoretical analysis. It also documents an early “labor strike” of female silk workers who protested against their impermanent status.

Women’s Work, Children and the Household Economy in an Old Regime City
The essay traces working women’s patterns in 18th century Turin. It focuses on the importance of women’s work in the domestic economy and it questions the ambiguity of women’s work, balanced between instability and flexibility. According to traditional male labour history, men’s work would be the staple one: adult men, husbands and fathers, would be the heads of the household and the breadwinners, whereas women’s work would be considered subsidiary and complementary. In contrast, this article demonstrates that women’s work represented an important contribution to the household economy, sometimes the only way to ensure the survival of all the family. Based on a vast range of sources, particularly the registers of the poor and family relief from the most important hospital in Turin (the Ospedale di Carità), the 1802 population census and notaries’ deeds, this article investigates the main informal features of women’s work. Firstly, it discusses the connections between the various phases of women’s life cycles, job opportunities, marital status, and immigration experiences. Secondly, it investigates working mothers to elucidate their position in the labour market in relation to family life cycles and to the number of young children and babies. Finally, it focuses on the correlation between women’s work and that of husbands and it explains the importance to diversify and to increase activities, jobs and incomes in the domestic economy. In conclusion, shows that women’s work, even though instable/flexible and informal, plays a crucial role in the survival strategies of preindustrial families.

Washerwomen in 18th Century Rome
The history of washerwomen in 18th century Rome shows some of the ways in which women were marginalized and deprived of rights and privileges, and the strategies they used to overcome such a disadvantaged position. While the job of the washerwoman was recognized by the majority of the population as ‘work’, it presented several aspects that were typical of women’s work: it was informal, flexible and, in many ways, marginal. Nonetheless, the lack of a congregation, in other words of a male counterpart to the job, and the lack of an internal organization, had some advantages. In many cases, washerwomen lived on the margins of legality, in a liminal territory, both from an economic point of view and from the point of view of gender symbols. Their activities in the realms of microcredit, pawn credits and consumption allowed them to play an important role in their neighborhoods and daily lives. The forms of inclusion and exclusion, entrance and exit from the job, show that the lack of a formal structure did not stop women from becoming washers. However, in order to become professional washerwomen and have many clients, women had to be rooted in the territory and be active on many different fronts.

Women’s Work in the Franche-Compté Region under the Habsburgs (1493-1678)
The large number of archives concerning the reign of the Habsburgs in the Franche-Comté offers a rare insight into the arduousness and vulnerability of women’s employment at the time, as well as into the imbalance that existed between male and female labour. The vulnerability of women’s (and girls’) employment can be found in many economic sectors and arises from a variety of factors: – uncertainty around the name: unlike men, women are not mentioned according to their names and surnames; moreover they are often given a nickname. Is this a sign of familiarity or a lack of consideration? – unqualified labour: they perform basic labouring tasks for builders and roofers; – uncertainty regarding job tenure: job duration can be measured on fortification building sites in most towns and cities; – finally, fragility of feminised jobs: for example, women working in bakeries and in the tripe trade. As women were forced to give up certain jobs in the 17th century, data on female hard labour becomes rare or even non-existent.

Women’s Work in Treviso during the 15th Century
In the 15th century, Treviso was part of the Venetian mainland, it was a “dominated city”. The Venetian domination had a direct consequence on the Trevisan population of around 10.000 inhabitants: the payment of direct taxes in order to support, chiefly, its war efforts. A fully shaped and regulated tax systern had been built during the 15th century: the estimo. In seventy years, from 1434 to 1504, nine censuses were carried out and thanks to them one can examine women’s activities. Women’s biografies can be reconstructed, underlying their work identities and patterns. Women occupied lots of occupations. The main question, after introducing women’s position in the field of work, is: are women’s jobs more insecure than men’s?