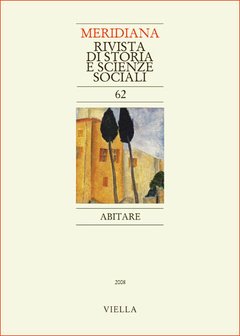 The definition of housing problems: myths, discursive space and institutional practices
As many authors point out, widely accepted definitions of a problem often rely on discourses and myths which draw on tradition and take disputable knowledge for granted. Indeed, in order to analyse policy responses, it is important to understand the problems to which policies intend to respond. The article aims to reflect upon the definition and construction of housing problems, through examples taken from English and American literature, and argues that this approach could become – without living out the more traditional ones – an important focus of attention, also within the Italian national context.

The housing question and its dilemmas
The article discusses the role of the three analytic elements housing consists of: inhabitants, houses and territory. These elements allow to understand housing as a multifaceted problem and claim for a stricter co-operation among disciplines (demography, sociology, geography,) involved in this fiels of studies. The concept of housing quality points to the importance of assuring not only a roof, but also a fair context to inhabitants living in a house. The aim of the analysis is to point to some new deprivations and inequalities related to the housing quality (safety, affordability, adequacy to needs) that are coming out from the difficulty to face the increasing instability affecting both social and family life, either housing market or urban territories. The complexity of housing question comes out from the different levels implied, as housing is a challenge for families or local governments; and private and public solutions have to be addressed both to territories and people.

Rethoric of housing and social construction of housing policy
The reappearance of the housing question in the public debate in Italy invites various questions about the categories adopted and their effectiveness in dealing with the new terms of the question. Everywhere in Europe the reappearance of new forms of housing deprivation from the ’70s has deeply changed the housing question and this makes even more evident the limitations of the traditional structure of social housing policies. In all countries, the selection of target populations has been weakened by considerable elements of irrationality and great limitations in terms of social adequacy: redistributive inadequacy and scarce effectiveness as regards some components of the population in need. The most remarkable has been the exclusion of poor and marginal groups of population from the benefits of housing social policy. The crisis of housing policy in the ’79s and ’80s opened a new space for making housing policy more «social». The coming of new practices, in contradiction with many traditional policy notions, offered new opportunities to get over the social limitations of policies and to improve their consistency with the needs and experience of dwellers. In this perspective the debate regained an idea which had a long tradition in the critical thinking on housing: that – further than its physicality and «object» nature – «housing» is act – meaning, action, relationship. The article argues that these principles – whose influence on policies so far has been very scarce – can work as a real counter-model even to-day and that the current risk of a new «differentialism» in housing urges reconsideration of their potentiality for housing policies.

Homeownership and Social Stratification
Current research on social stratification is largely focused on social classes, defined on an occupational basis, and on the transmission of human capital as a relevant strategy for the reproduction of social advantages and social mobility. Both the link to the labour market and education are core elements in social stratification. However other resources and processes are not negligible. The paper discusses the relevance of housing wealth and of the intergenerational transmission of home ownership in the structuring of social inequality. A theoretical framework for an integration of this theme within social stratification is depicted, considering both the legacy of the classics and contemporary research issues.

Housing and urban regeneration
Experiences and critical remarks from the case of Turin Public housing has moved away from the centre stage because of the privatisation processes and the decline in the public housing sector investments. This article intends to discuss the main changes in housing policies over the last years, mainly focusing on the case of Turin. In our view, the city is a good example to analyse the progressive changes of the housing issue, the emergence of new local policies to provide affordable housing, the relationship between housing and urban regeneration policies. Starting from Turin, the aim of the article is to consider if current housing policies define a neo-liberal approach to housing and critically discuss its main implications.

Mastering the daily life in the inner spaces, rooting it in the outer world. How to design a space of confinement
The major socio-demographic transformations expose an increasing part of population to risks of long-term dependency, and consequently to be confined in a circumscribed physical space. Segregation can be realized at two different levels of severity, i.e. a lighter one (when movement of the individual is gradually reduced to the core of his own space of daily life) and a harder one (when the individual is transplanted in a totally extraneous space, as a nursing home or a prison). At both levels, even though with a graduated severity, confinement menaces the self of the individual, corroding the two remaining built-in functions of social life: the ability to master the inner space of life, and to save some sort of rooting in the surrounding world. Sustaining the life conditions of the new chronics, victims of harder or lighter segregation, implies thus two complementary strategies: a well gauged design and modularization of the interiors, and the permeation of the inner spaces into the outer world. The article reviews a number of cases of implementation of the two strategies, separately for lighter and harder confinements, evidencing qualities, limits and pitfalls of both, and aiming to a cross-fertilization of the ideas in different domains.

Living on the road: absence of house and processes of home rebuilding
This article discuss the housing issues referring to the situation of poverty. The aim is to point out size and features of housing from an extreme perspective, the one of the homeless. Housing hardships may show up under more or less serious and different ways and manners. The study of the very extreme conditions of housing deprivation may contribute to enlighten, by comparison, some significant features of housing experience, to underline the inadequacy of the traditional policies and to suggest different interpretations, emphasizing how problematic are the conceptual schemes used to represent the housing issue. Basing itself on the results of several researches carried on in the Turin context following the ethnographic method, the article schematizes meanings and features of the housing deprivation, from the point of view of the homeless. The consequences of the lack of housing are examined under different aspects, together with the process of coping carried out by the homeless.

Young Italian people and housing choices
The Italian Multipurpose survey on Family and Social Actors, carried out by ISTAT in 2003 and covering almost 15,000 young people aged 18-39, confirms the latest-late transition to adulthood of Italians and some other well-known features that are peculiar to the Italian context. The lack of adequate independent housing solutions appears to be an element that constrains a huge proportion of young Italians making them remain in the parental home much longer than elsewhere. The peculiarities of Italian society, characterised by a scarce and expensive rental market, a high proportion of housing property, the lack of social housing and special credit measures for young people, reinforce the role of the family of origin.as a crucial subject in allowing young Italians to get an independent home.

Do migrants live differently?
Housing differences and disparities among foreigners The article investigates the various housing integration processes of migrants. In order to point out some of the main factors responsible for this heterogeneity, the housing integration paths of Romanians and Moroccans living in Turin are compared. Actually, these two ethnic groups show significant differences in family models, gender roles, patterns of social capital and in other social, cultural and economic aspects which can play an important role in explaining differences in housing integration. The emerging data and information are organized in an analytic framework which includes the macro and micro levels.

From dwellings to living styles. New practices and symbolic aspects
In contemporary societies living conditions are strongly changing, generating more composite uses of dwellings. Behind widespread tendencies of re-organization and re-signification of residential patterns in a general context of uncertainty, it is possible to discover emerging housing conditions and practices strongly differentiated according to new living styles as well as to more classical social stratification. In particular, the article analyzes the relationships between families and rising dwelling frameworks based on the processes of emptying and re-filling of the houses, on the multiplication of the habitation units, on the interweaving between private and public spaces.

From consumerism to «consumerism»: a study in Catania
The object of our study is «consumerism». Ranci says that «consumerism » is a «consumer movement industry»: a collective movement similar to a «market» where different actors take part, with different status and roles, offering the same «product». «Consumerism» arrived in Italy, and above all in Catania, with some delay and , without consistency and political support, it risks remaining an instrument of demagogy or an elite phenomenon. «Consumerism» is «collective action individualized» for «people with a high level of education». The revolutionary power of this movement is not still demonstrated and it is a problem of governance, without which the consumer sovereignty is still limited.

The long open out. The humiliation of identity in the italian detention centres
Ten years after their institution in 1998, the immigration detention camps are still in the focus of the Italian political debate. This article collects life stories from the camp of Turin, casting light on the complex reality of the administrative detention. The sociological analysis gives us back the most often neglected point of view of the actor, the immigrant, and underlines the consequences of the detention on personal identity.

Olof Palme and the Winds of History
Olof Palme, chairman of the Swedish Social Democratic Party (Sap) from 1969 to 1986, and prime minister from 1969 to 1976 and again from 1982 to 1986, was a politician well-known abroad and controversial at home: the two-volumes biography written by Kjell Östberg – the first volume covers the period 1927-69 (from Palme’s birth to his appointment to chairman), while the second is on his years both as prime minister and in opposition – is a valuable contribution to the knowledge of Palme’s achievements (his first mandate is related to the golden age of Swedish reformism) as well as ambiguities (his radicalism as a speaker, but not as a politician). His murder is still a mystery: but the hatred he was surrounded by is reason for thinking about the challenges issued to those who are intended to reform market society.