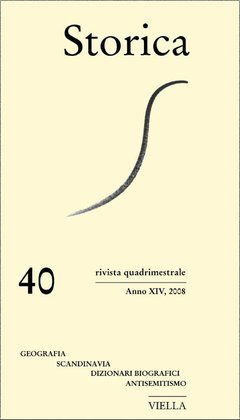 The dictionary is dead. Long live dictionaries! Notes for a history of national biographical dictionaries in Europe
Since the XIXth century universal biographies of illustrious men left their place to national biographical dictionaries, collecting the lives not only of the great and illustrious, but of every member of a given national community who was deemed in any way worth remembering. Such efforts were obviously related to the process of nation building and meant to perpetuate the new equation between state boundaries and national community. Born in a male-dominated society and strongly oriented towards the celebration of political, scientific or artistic success, they had scant attention for women (only 4% of entries in the British DNB and even less in the Italian DBI); things are slowly changing now, but the model of the national biography is alive and well in the XXIst century, as proven by the new Spanish and Finnish examples, however out of date the whole concept may look in comparison to current historical trends.

Christian Life in Twelfth-Century Scandinavia: A Comparative Approach
The article seeks to place twelfth century Christian life in Denmark, Norway, and Sweden in the broader context of European Christianity, suggesting comparisons with other outlying, recently Christianised regions as well as with the centre. It proposes that contemporary impressions of barbarity can often be deceptive, and Christianity in twelfth-century Scandinavia is best viewed as part of a greater European picture.

Relations between history and geography in France: tensions, disputes, calms
In France relations between history and geography have been strongly influenced by long-living tensions, resulting from the separation between the two disciplines at the time of the establishment of geography as an independent university field at the end of the XlXth century. With theses characterized by high historical content, geography of the first half of the XXth century has had to build its identity against history. Recurrent justification led to the concept of a time scale incommensurable with that of history. From the fifties to the eighties, tensions developed over the issue of the reasons which prevented the creation of single social science. During the same period, criticisms of determinism, because of growing neglect, did not allow production of geography. Since the beginning of 1990s, interest of histo- rians for anthropology or sociology has led to less contentious relations. In addition, researches which link history and geography are no longer deriving from an interdisciplinary logic, but are maintained at the appropriate level among researchers participating to a limited project.

Managing the racism: the persecution of the Jews in Italy
The article presents a historical review of the promulgation of anti-Semitic laws in fascist Italy and of the motivations of the government to apply them. Why does a fascist regime become anti-Semitic? The persecution of the Italian Jews was one of the inner components of the totalitarian logic. The essay is divided into several segments, each addressing a specific aspect of the racial persecution between 1938 and 1945. The last one covers the immediate Postwar period.