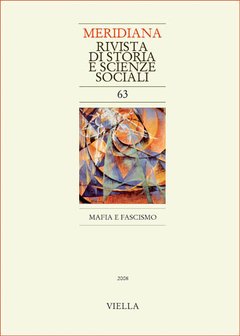 The Mafia and the new fascist politics
The mafia has always been connected to politics, even if in many different ways. Also in the 1920’s the mafia tried to establish some links with the new fascist politicians while, on their side, the public authorities had to deal with some bosses. The aim of this paper is to show that this double-sided relationship didn’t follow a straight line. The Cosche didn’t realize immediately what was going to happen in 1922 and each cosca tried to ally itself with the Fascist party independently, choosing its own strategies. On the other hand, fascism attitude towards the mafia kept changing over time, according to the needs of the regime.

The problem of agrarian cooperation
After WW1, in Mussomeli, near Caltanissetta, the soldiers cooperative controlled by the entrepreneurial «mafioso» power, became the social mediator for renting land from the owners. This was a sabotage of public plans according to which that role was to be played by a big public enterprise. In the following years, the local organized gang of the mafia succeded to consolidate a social coalition in accordance with the property in order to manage taxes with the aim to create a monopoly of resources. In the thirties, the cooperative found itself under the «Mori storm», but the attempt to disrupt the organized gang of the mafia was not successful. Once the judicial storm was over, the system of government reluctantly agreed to return the control of the management of the land to the mafia with the secret hope that this could help to spread the new rhetorics about the agrarian propaganda of the regime.

Devil’s Advocate
This paper examines the «imperatives of the reasoning» concerning the mafia under the fascism. We are before a rather reticent rhetoric (ancient and contemporary) on the nature of the mafia which pretends to explain in apodictic form what it is not. The lawyers play a fundamental role in the creation and maintenance of the imperatives of the reasoning on the mafia, because of the same nature of their profession. They are distant but near to their assisted and this «specific ambiguity» characterizes the position of the lawyer within the judicial stage. The lawyer is, for his nature, the man of a faction, he is not obliged to the truth; on the contrary he is faithful to the duty of loyalty and honesty to his client and must be indifferent to the social and political effects of the judgment. Of course both for the lawyers and their clients, the mafia didn’t exist and if it existed it was another thing. The paper is about «this other thing», i.e. mafia’s ability to harness both verbal communication and lawyers work in order to put up an identity fit to play on the public scene.

On trial. The cosche of Palermo
Between 1925 and 1930, fascism dealt a strong blow to the mafia, in fact Sicilian cosche had to go on about a hundred of trials. By analysing the trial papers, this work shows how the cosche of the Palermo district were structured in the Twenties. One important thing that comes out is that the mafioso control is a sort of legacy passed on through several generations of the same family or group.

Social identities and political conflicts in internal areas
This article analyses the trials against organized crime in order to highlight the net of relationships, both horizontal (territorial mobility, parental relationships and property acquisitions) and vertical (bonds with the political sphere and with the institutions of the state and the society), through which the careers and the fortunes of characters, families and groups of mafia of modest social origin are built. What comes out is an image of the Mafia that goes well beyond the horizon of the latifundium and the town hall. In fact, it appears as an organization with ability of social control and projection in economic and political circuits of such wide dimensions as to guarantee the persistence of a phenomenon to which for too long it has been refused to apply the label of organized crime.

From the past to the future. A look from the ’30
This article analyses a report on the palermitan mafia of the ’30 written by the Regio Ispettorato of public security for Sicily, the body created in 1933 by the fascist regime to make a second operation against mafia after the Mori’s one. The Mussolini’s claim to have definitely defeated the phenomenon during the previous years is contradicted by this report, that shows the articulated structure and the activities of the cosche on the outskirts of the town.

A marxist debate: the mafia and latifondo
This article analyzes how the mafia was viewed by the Italian communists in the twentieth century and focuses on their idea that the criminal organization was a consequence of feudal remainders in the sicilian society. The essay focuses on the writings of two very important politicians of Pci (Grieco, Sereni) and tried to understand how their tradition has survived up to today.

How to interpret the Other. The Mezzogiorno in the discourse of the Lega Nord
The intellectually sustained Padanian nation-building discourse produced by the Lega Nord pays relatively little attention to southern Italy. This discourse generally avoids popular stereotypes on the South, but it does reflect intellectual discourses that relate the economic success of regions and nations to their cultural identity. In its interpretation of Otherness of the South, the Lega argues that the region has been contaminated by extra-European cultural influences, but equally envisions the region as a victim of the Risorgimento and the Italian state.