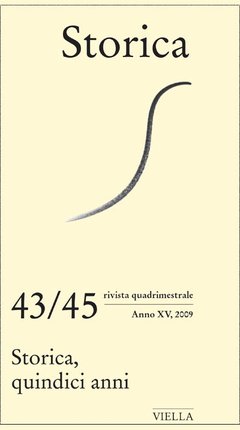 Social Mobility and Middle Ages
Notwithstanding its relevance, social mobility has not been at the forefront of the agenda for historians of the Middle Ages. The first part of this paper deals with the reasons for this lack of interest, highlighting the role of historical models like the French «feudal revolution», neo-malthusian interpretations, the English commercialization model, and the great narrative of Italian medieval merchants. The second part assesses the extent to which this lack of interest has been challenged by conceptions of social space and social mobility developed in the last decades by sociologists and anthropologists. It is really important to indicate the gaps in our understanding and to clarify research questions, technical problems and methods. The paper examines the constitutive elements of social identities, the plurality of social ladders, and the channels of social mobility. It touches upon the performa- tive role of learned representations, and the constraints moved to human agency by family practices and gender. It underlines the importance of studying mobility within social groups, and argues that we must distinguish between two different types of medieval social mobility: au- togenous social mobility, and endogenous or conflictual social mobility.

Symbols of politics. The strange case of the liberty hat
The article attempts to explain how and why during the French Revolution the Phrygian red hat was associated with the ancient tradition of the liberty hat, becoming a universal symbol for freedom. It is argued that the great strenght and the extraordinary vitality of this symbol de- rived from a coalescence and condensation of different messages in a specific political context. Symbols then, are seen here not as the recipient of mysterious and hidden meanings nor as a superflous superstructure hiding «real» interests and passions but as part of a conflictive process, a battle for giving meaning to the world, a hegemonic fight for the control of common sense.

Market and European identity: ethical pluralism according to Paolo Prodi
Paolo Prodi’s work identifies the European genetic code with the persistent tension between different powers: the States, the Church, the market with its ethical principles of self-regulation. The ethical principles of the market were constructed in the early modern period through the widening of the category of theft, seen as a breach of loyalty, trust and equity in trade. The risk is, for contemporary Europe, that of replacing the existing pluralism with the monism of a global market. The narrative is intense and fascinating, yet it overplays the intrinsic ethics of the market in the early modern period, through the lens of mainly doctrinal «scholastic» sources that ignore practices, contexts, conflicts.

Ethics and merchant practices in the «genetic code of the Western man». A comment on Settimo non rubare, by Paolo Prodi
The essay puts the latest book by Paolo Prodi in the context of his long-lasting research project on the limits of civil power in the western tradition. It argues that in the field of market relations the role given by Prodi to Christian ethics as the main foundation of mercantile trust conceals the processual and contextual modes of interactions, through which European commercial network expanded in the world.

The republic as historical category
This essay analyzes the formation of the «republic» as double-sided object, a political concept and a histori- cal paradigm, on the ground of the very influential models proposed by John Pocock and Quentin Skinner at the end of the of the 20th century. In the work of the two historians the «republic» has been represented as a political form provided with strong temporal continuity. The languages of the civic virtue and the political liberty, elaborated in ancient times (Greek or Roman), are revived in the Italian communes of the later Middle Ages (in Skinner’s vision) or during the Florentine Renaissance (according to Pocock). Though their views about the characters of these languages diverge markedly, Pocock and Skinner share the same intellectual project: the rediscovery of a specifically republican tradition who runs through the whole modern age, to the American and French Revolutions, and returns as an answer to the crisis of western political systems in the second half of the 20th century (also thanks to its deep historical roots). The essay looks into the relationship between these languages and the institutional set up of the political systems in which they are practiced. On the ground of northern Italian examples, it has emerged that this relationship is very problematic and that the perspective of the «republic» as coherent an durable notion, outside the field of the more traditional history of ideas, is untenable.

«Nous ne sommes pas l’Italie, grâce à Dieu». On the idea of decadence in Italian national discourse
Italy is the only national community that narrates its story, from the fall of the Roman Empire and the barbarian invasions, as a line that goes up and down, following a logic that highlights two «highs»: the Renaissance and the Risorgimento. The Italian nation state has codified this interpretive canon giving a place of honor in school programs to these two moments and instituting in many Italian universities chairs in Renaissance History and History of the Risorgimento. This essay dwells on the construction of the central category of decadence in Italian culture from the 18th century onwards and its persistence in Italian historiography and national discourse until this day. The focus will be the historiography on the 17th century, since, if according to the national narrative Italy has gone through more than one decadence – a long one, from the end of the Roman Empire to the 14th-15th centuries, and a short one, lasting little more than one century from the mid-sixteenth to the end of the seventeenth centuries –, it is on the latter that any history of modern Italy, confined between decadence and Risorgimento, hinges. The Risorgimento is mainly intended, starting from the late 18th century, as a reform of the letters and culture. Thus it is the late eighteenth- century debates on Italian culture that it is necessary to examine in order to understand the role of the crucial pair decadence/Risorgimento in the construction of Ital- ian national discourse and Italian representations and self-representations until today.

Ancient constitutions and «orientalist» narrative from the 18th to the 19th century
Between the last decades of the eighteenth century and the first of the nineteenth, the net of ancient corporate constitutions was partially or totally dismantled not only in continental Europe (with the French Revolution and the Napoleonic Empire), but even in the new British colonial empire in India. Comparing recent literature both on the «Indian» writings of Edmund Burke and on the Napoleonic transformation of Europe, the article develops some reflections on the notion of «orientalism» and on the potential and limits of its use in historical writing.

Groups without ethnicity: searching for nations in Central Asia (1917-1924)
Through a discussion of recent literature on early Soviet Central Asia and the use of archival material, the essay sheds light on politically legitimate discourses used in Central Asia from the revolution to the creation of administrative units based on ethnic criteria (1924). The focus is on the shifts in the accepted national catego- ries and the derivative nature of the «national discourse» used at different moments and at different levels in the administration. The article also provides a contextualization of this specific discourse within Soviet transformative policies of local economy and society.

Comparing fascisms. A reconsideration
This article reflects on how historiographical changes in the interpretation of fascism since 1989 have modified our understanding of its European spread. Italian fascism and its history is considered here as a central starting point for a comparative analysis of this European phenomenon, as well as an influential model for similar movements and regimes in various countries, with special attention to the cases of Spain and Portugal.

The Soviet Collapse
The essay is a slightly modified version of the final part of the section Questions and Débats of the Histoire de l’URSS that will be published in the collection Nouvelle Clio of the Presses Universitaires de France. The fo- cus is on the factors that brought about the final collapse of the Soviet system in 1985-91, as well as on the main interpretations and debates caused by this most important historical event.

Historians and Emotions
Interest in the emotions among historians has grown rapidly in the last two decades. A paradigm shift in the understanding of the nature of emotions as part of cognitive processes is responsible for much of the recent attention, but the curiously delayed reception of Elias’ The Civilizing Process connects present attempts to study emotions in the social sciences to works on collective psychology produced in the 1930s. This article explores re- cent developments in the history of emotions, and, from the perspective of medieval studies, discusses fortune and criticisms of the new field.

Experimental historiographies. Gender and World history
A new interpretive hegemony is making itself visible in gender studies. Disseminated and discussed essentially in North American scholarly journals, it is situated at the intersection between the historiographies of family, women and gender and world history. A lively debate on definitions, chronologies, areas of research is encouraging us to rethink the founding categories of this disciplinary field, which for a long time has been dominated by the language and scholarly traditions of a history of the West. The emergence of this new hegemony displaces in the direction of ‘world’ or ‘global history’ a practice of historical writing which has traditionally privileged circumscribed, ‘particular’ areas of enquiry, located within the boundaries of communities, regions and nations. In what follows, I outline the formation processes, hierarchies and asymmetries of academic power, as well as the internal tensions, innovative trends and challenges that define this emerging field.