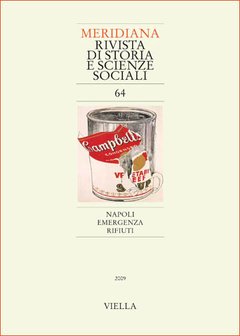 Understanding the garbage emergency in Naples. An introduction
In their introduction, Gabriella Corona and Maurizio Franzini, besides illustrating the content of the essays that make up the monographic part of this issue of Meridiana, look at the main issues in the waste disposal emergency in Naples and Campania: the slowness of politicians to acknowledge the problems – a slowness that may have catastrophic consequences in the case of waste disposal –, technical mistakes, «weakness» in dealing with private entrepreneurs, and an inclination to coping with the more serious problems by recourse to emergency management.

Waste and the dissipative metamorphosis of nature
Waste disposal is a fairly recent problem in the history of industrialized countries, albeit an extremely complex one. In this essay, the author reminds us that the origin of consumerism dates back to the 1930s and began to produce its fullest and more pervasive effects only from the 1950s onward, when new productive and social models came to the fore. Before those years there was a long-lasting phase when industrial capitalism coexisted with recycling practices, perpetuating models typical of preindustrial societies, where only a small part of waste ended in dumps. Organic materials were re-employed in agriculture. Other materials, such as clay, wood, lead, iron, stones, lime, wool and leather were re-employed for other purposes. As quantities produced increased and the materials products were made of changed, waste turned increasingly into a political problem calling for a social and collective solution.

For twenty years our area has been going through a garbage emergency
Illusory expectations regarding the future of waste reduction and recycling have led to errors in the planning and design of waste management. Notably, it is the closing down of landfills and public rejection of thermal treatment plants that has led to the recent collapse of the waste disposal system. Politicians have sought easy social consensus, but were then unable to point out exit routes from the crisis. The camorra then wedged itself in the gap between fear and inertia. Even today, the system is very unstable. Modern, rational and strategic decisions are needed to definitively avert the threat of a new crisis.

The garbage crisis and land management in Campania
In his essay, Antonio di Gennaro reconstructs the dramatic decline of Campania felix, once an elaborate mosaic of land, ecosystems and landscapes. Its origin is in a rupture of the equilibrium between urban and rural areas, an equilibrium that also extended to waste disposal. This rupture goes a long way back, but became deep and clearly perceivable around the middle of the twentieth century as a result of a number of factors, including a strong population increase.

From Campania Felix to a non-place. Transformations in Terra di lavoro from the second postwar period to the present day
Terra di lavoro (literally «Land of Work») is an area in the Campania region, today included in the province of Caserta. It has always been characterized by vast natural resources (hence the characterization Campania Felix), but over the last decades it has followed a development which, besides producing economic growth, has had destructive effects on the countryside and the environment, leading it to become a privileged area for indiscriminate waste disposal, whether illegal or not. How did this land, praised for its fertility, come to be known worldwide as Italy’s largest waste dump?

The environment disaster in Campania: Legal reactions
Today, the illegal waste disposal and building cycles are the favorite fields of action of the so called «ecomafias». In the law milieu, the term «ecomafia» designates an illegal network committing environment-related crimes. Although police investigations have shown that this is a nation-wide problem, the most critical situations occur in the Campania region, and especially in the provinces of Naples and Caserta. What are the environmental, social and political repercussions of the illicit trade of waste, and of illegal building works? This essay focuses especially on illegal building and its catastrophic environmental consequences along the Domitian littoral in the province of Caserta.

Chiaiano 2.0
This paper investigates some features of the so-called «Chiaiano rebellion», that is, the protest that flared up in Chiaiano, a neighborhood in Naples, during the garbage emergency of 2008. The author’s aim is to shed light on some aspects of the local resistance against State action. He devotes special attention to the depiction of the protest in local media, including newspapers, radio, tv and, above all, the Internet.

Neapolitan nonsense
Naples made world headlines twice during the last twenty years or so: first for the «Neapolitan Renaissance», and some years later for its mismanagement of garbage and other administrative scandals. Today, Naples is known to world public opinion only for disasters. Vezio De Lucia was the Mayor’s assistant for «urban livableness» during crucial years in Naples’ recent history. In a conversation with Edoardo Salzano held two years ago, De Lucia remembers the principal phases of the town planning process of his city, and analyzes some crucial moments and aspects (e.g. the story of Scampia, the relationship between planning and building activity, and public transportation). He makes a comparison between Naples’ urban planning and development experience in those years – a substantially negative one – and similar experiences in Milan, Florence, Bologna, Rome and Turin.

Naples: Representations and stereotypes
In a debate moderated by Gabriella Corona, Francesco Benigno, Marcella Marmo and Enrico Pugliese discuss what the general characteristics of a stereotype are and, in particular, the stereotype of Naples, how it has been used, and what consequences this use may have on the social life of the city and the Campania region. A stereotype, the three participants in the debate tell us, contains elements of the truth, but not all the truth, and often generates an ambiguous gray zone between the true and the verisimilar. It is the result of a process of simplification and selection based on criteria of questionable validity and unproven generalizations. The simplification leads to explain phenomena entirely by one or the other of the possible variants of the stereotype, overlooking the role of other factors. For example, Pugliese observes that in discussions of Naples’ problems stereotypical assumptions tend to overshadow the importance of the issue of unemployment. This is all the more lamentable when one considers that Naples was, until not long ago, an industrial city, the third in Italy. Marmo makes some interesting considerations on the role of the stereotype of Naples in determining the great and well-deserved success of Saviano’s book Gomorra, and the effect that this may have had on Neapolitan political and intellectual life. Benigno invites us to look at an especially dangerous aspect of stereotypes, namely, the risk of them generating self-fulfilling prophecies. Insistence on a derogative stereotype can easily induce people to behave as if their reality was as represented, and their behaving «as if», in its turn, can modify that same reality, ultimately making it less distant from the stereotype itself.

The conflict of memories. The political use of memory in neo-fascism and the extraparliamentary left wing
During the crisis of the centre-left government, which began with the result of the general elections of 19th May 1968 and which exploded in all its drama with increasingly strong student protest and the mobilization of the workers in the troubled autumn of 1969, the far right and the extraparliamentary left wing resorted to the memory of the first postwar period as an instrument of their political programs. The far right and the extraparliamentary left wing perceived the crisis as a crisis in the system and intervened to radicalize it, as had happened in Italy at the end of the First World War. The political use of memory became, therefore, a strategic choice, an instrument which the Neo-Fascists and the far left used to exacerbate the atmosphere of tension and cause the political and social conflict to degenerate.

Angkor: Restoration practices and symbolic uses
The article analyzes the history of archaeological restoration practices in Angkor Wat – the world largest temple, located in north-western Cambodia – from the French colonial domination to present Unesco interventions, in relation to larger political projects, both national and international. The author explores how these projects legitimized themselves through restoration practices which went hand in hand with a symbolic and political use of a powerful icon such as Angkor.