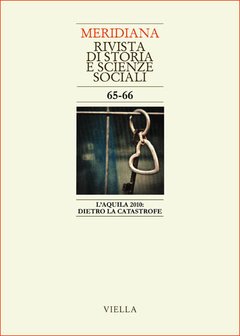 L’Aquila as a scandal
Recovering after a natural or artificial disaster is always extremely difficult. In the case of an earthquake, the first problem is to provide a suitable shelter for all those whose homes have been seriously damaged and to help all those who lost their work, their revenues, their family and friendship connections. The rebuilding programmes can subsequently start. Post-war Italy has accumulated a very large experience in post-earthquake recovery. Some of them have been successfully managed, in some other cases the recovery process has been managed too slowly, inefficiently and wastefully. Considering all these experiences, and considering the knowhow which has been accumulated, it’s rather difficult to find a reason for what happened in L’Aquila and its surrounding after March 2009 earthquake. The immediate rescue action was extremely efficient, but 18 months later the housing, monuments and workplaces reconstruction hasn’t yet begun. A great part of the inhabitants live in precarious homes, plenty of them still live away from their workplace, while the judiciary is investigating several doubtful operations involving the Civil Protection National Service and well known national politicians and even members of national executive.

L’Aquila: only the name is left. Story of an Earthquake
The earthquake of 6 April 2009 killed 308 people, ravaged the city of L’Aquila and its surroundings and disrupted both the economy and social relations in the area. The media praised the efficiency of Government’s action and the «miracle» of New Towns built in few months around the old city centre, one year after the earthquake. The article provides a careful account of what happened after the earthquake and shows the one-sidedness of such praises. Indeed, L’Aquila remains a destroyed city, where society is paralysed and bad practices are becoming more and more an alarming problem.

Another earthquake. The impact the C.a.s.e. project on city-planning
The unique monumental heritage of L’Aquila has been seriously damaged by the 2009 earthquake, but it can be successfully restored. Instead of providing temporary shelter for the inhabitants and start as soon as possible a restoration program, the day after the disaster, the National Civil Protection authority and the government, started an ambitious plan to provide the population with an almost permanent accommodation; i.e. the C.a.s.e. project which adopted a sophisticated anti-seismic technology and planned to build 4600 apartments. This article argues that this was an extremely questionable decision first of all for the city-planning, which has devastated the country-side surrounding L’Aquila and its landscape. It was also an extremely expensive measure, seriously damaging the inhabitants’ social life and cultural identity, which is extremely difficult to revert and which has been taken ignoring the democratic will of the population and of its representatives.

Emergency and reconstruction after an earthquake: community resilience and psycho-social support
Starting from the experience of the support to the Abruzzo’s population after the earthquake of April 2009, this article develops some reflections on the role of psycho-social intervention in an emergency context. The central idea is that each local community hit by the earthquake is characterised by a peculiar model of resilience, depending on previous experiences and events. The main role of psycho-social support after a calamity is to help a community to use its resources and to renew its resilience model in order to cope with different types of problems.

Money and mind: sustainable policies for the rebirth of Abruzzo communities
Looking into the future of the City of L’Aquila and its territory, the article considers the possibility that the physical and social reconstruction of the town and many villages affected by the earthquake, which have always been an integrated local system, can represent an opportunity to test new models of organization and development. Based on empirical information, the article describes what has been done and what could be done in order not to break in artificially and traumatic way the link between urban space and everyday life of people. Public policies for the rebirth of this part of the region should be inspired by participatory planning criteria, with a real involvement of local governments and communities.

Rebuilding the community with the community. The participatory alternative after the emergency
The article proposes some reflections on participatory planning in emergency cases, starting with the analysis of some national and international experiences as useful practices to envisage a bigger role for the inhabitants, hit by natural disasters, during the different stages of the management of the emergency and in the rebuilding of their own territory.

Exceptional events as a source of support. The Abbruzzo earthquake between media celebration and political opportunism
The article concerns the earthquake in the Abruzzi studying strategies exploited by both journalists and politicians to use this event as a communicative resource. Starting from the analysis of press and television coverage, authors highlight the different roles played by journalists, government and, overall, by the Prime Minister Silvio Berlusconi, focusing on a paradigmatic event: the delivery of new houses for earthquake victims.

Emergency as a style of government, beyond the Civil Protection’s scandals
Emergency powers are generally required in extraordinary cases, such as when public safety is seriously threatened. However, in Italy their exercise is increasingly frequent, since the definition of «emergency» has been stretched to cover «big» and «mega» events. This article’s aim is to shed light over the «normal» functioning of the Italian Civil Protection Department, beyond the scandals which surrounded it since February 2010. After retracing the extension of the emergency’s definition, peculiar ways of governing by dispensation and outsourcing are explored. It is argued that such a style of government, generally justified in terms of efficiency, allows the introduction, the legitimation and the perpetration of opacity in governing ordinary situations.

The economic effects of the earthquake: the occupation in L’Aquila area
An exhaustive estimation of the economic effects of an earthquake is a very complex exercise, due to the several aspects that should be taken into account (e.g. short and long term ones, effects on incomes and wealth, distributive consequences) and to the limited availability of data suited for analyzing every aspect. In this paper we focus on the occupational effects of the April 2009 earthquake in L’Aquila, because job losses are the main source of income deprivation in the short term (especially when, as in Italy, a generous unemployment benefit is not provided for all workers). Comparing the recent experiences of Abruzzo and L’Aquila to those of the other Italian macro-areas – also in order to distinguish the specific effect of the earthquake from the common shock coming from the current economic crisis – in the paper we present the most updated data about occupational trends and about the provision of the benefit paid to suspended workers (Cassa Integrazione Guadagni), showing that in the months after April 2009 hardships of people living in L’Aquila area have been exacerbated also by occupational difficulties.

Aid and miracles around L’Aquila’s earthquake
On April 6, 2009 L’Aquila and its surroundings were hit by a disastrous earthquake. An ethnographic observation of a traditional feast day in a rural village – and of the exceptional elements conveyed by the disaster – has highlighted how humanitarian aid may contain codes of political propaganda that leverage the thaumaturgical rhetoric of miraculous healing.

The Theory that won’t die are those that confirm our basic assumptions: fifty years of amoral familism
This article analyses Edward Banfield’s book, The moral basis of a backward society. According to this American scholar, prioritizing present orientation over future planning is the distinctive character of backwardness. For this reason, in understanding backward rural contexts, cultural factors are far more important than socio-economic factors. His research is extensively discussed in the first section of the article. Then, in the second part, the main criticisms in both international and Italian debates over the book are presented in order to contextualize the reasons for the strong scholarly interest generated by the theory of amoral familism.