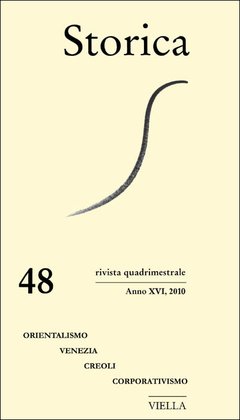 Historiography beyond Orientalism
Public «discourse» has played a central role in historical debate on the contemporary Middle East. It is also integral to a long-term intellectual paradigm, namely «Orientalism», as described by Edward Said. Within this context, it was thanks to George Antonius The Arab Awakening, published in 1938, that, for the first time, not only the standards of an Arab «political question» but also the terms for a new historiographical insight could be established. This article’s main focus is not Antonius’s thesis but a re-thinking of the historiography on the Middle East in the light of the influence that Antonius and his book have had on the intellectual background of the two most important scholars in history of the contemporary Middle East: Albert Hourani and Elie Kedourie. Whether opposing its arguments (Kedourie) or following its wake (Hourani), for both scholars the importance of The Arab Awakening went far beyond the merits or demerits of the text. Hourani and Kedourie represent a fundamental starting point in historiography: well before any post-colonial analysis, they both took a distance from an «orientalist» form of representation, prevailing at the time of their writing, laying the foundations for a new area of studies.

Creolism in Spanish America: from a colonial controversy to the mystifications of history
This essay examines the evolution of the concept of creolization in Spanish America from the 16th to the 20th century. While modern scholars have often celebrated creolization in the New World as «creative adaptations», in early modern times the fact that transplanted Europeans changed in the Americas was typically seen as evidence of cultural degeneration. The emergence of a creole identity during the colonial period is thus questioned in order to show how this concept is linked to the rise of national and racial categories in the 19th century.

«The People are Chattering»: Spaces, Publics, Voices in Venice during the Italian Wars
During the War of the League of Cambrai (15091517), Venice lost (and regained) most of its mainland territory while foreign armies threatened the edge of the lagoon. The crisis spurred vigorous city-wide debate, an «evanescent public sphere» composed of printed and oral communication, unfolding in a variety of public and private urban spaces, and including members of all classes. After surveying the historiography of the Habermasian and post-Habermasian public sphere, this article aims to provide a new definition of public political space by examining this critical historical moment.

The European political system at the end of the Middle Ages. A book by John Watts
This review article focuses on John Watts’ recent overview of late medieval European history. The book provides a subtle account of the political and governmental growth of Europe from 1300 to 1500, revising effectively the still prevailing concepts of «waning» or «crisis» and offering an updated and original re-interpretation of the consonances and the shared patterns of European political life, filling an important historiographical gap.

The search for a new order between State and society. On the subject of some recent studies on corporatism
The theoretic and practical experience of corporatism has recently been at the centre of a renewed historiographical interest. This paper retraces the corporative theory’s alternating fortunes, highlighting the main features of one of the most important chapters in the legal and political history of Europe between the two World Wars. As recent studies show, corporatism was more than just a rhetorical and ideological theory at authoritarian governments’ disposal; in its most advanced versions, it constituted the effort of bringing together classical models of the order of State and Society.