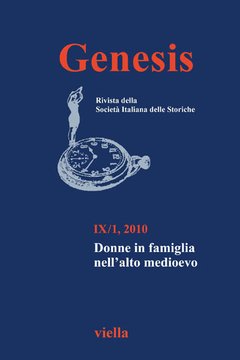 The Case of Optatus’ Wife and the Evolution of the Conjugal Bond in the 6th Century
The development of a Christian teaching on marriage and its dissolution gained momentum, on the doctrinal plan with Augustine of Hippo’s thought (4th century), in the context of contemporary social and legislative developments in the sphere of conjugality. A century later another African bishop, Fulgentius of Ruspe, took up Augustine’s elaboration and brought it further, promoting marriage to the same religious dignity of the ascetic vow, in a period when also imperial legislation was promoting a restriction of the legal possibility to dissolve the conjugal bond. The comparison between the position of imperial law and Christian though in the early 4th century and in the 6th century can show how the vision of marriage was developing in Late Antiquity.

Family conflicts involving « single » girls during early Middle Ages (Vth-IXth c.)
The status of the nubile girl who lived within her family, in the Early Middle Ages, is ambiguous, while the status of the young man does not seem to raise problems. This “ single woman’s “ condition, for the woman who did not choose to dedicate herself to God, does not seem natural and can generate family conflicts. The girl is valuable, but she’s also a risk factor for the family. Her more or less prolonged celibacy preserves the opportunity of a fruitful alliance to come, but it puts her male kinsmen’s honour at risk. All the plots aiming at organizing a marriage against the will of the father are not however realized at the expense of the girl. Even if we should not overestimate it, it seems that a real feminine sociability often join the feminine members of the household together. Old enough to be married, the girl is carefully looked after, after the more uncertain period of the childhood. If she does not get married nor enters a convent, especially if she does not belong to the élites, she seems confined in a subordinate position, which lets her deprived economically and at risk of a fall in social standing. Only the most audacious can hope to get loose from guardianship. If the narrative sources express a rather general distrust for the girls who remain at their parents’ home we should not forget that the expression of this distrust is also intended to criticize a part of the élite, the revolt of the sons is more and more described in the same way as erring ways of disobedient girls.

Brothers and Sisters: Family Solidarity and Patrimonial Partition in the Early Middle Ages
This essay illuminates the place of women in sibship and the relationship between brothers and sisters, nephews and nieces, documented through Bavarian and Tuscanian charters of the 8th-10th centuries. Sisters are not necessarily disadvantaged in the partition of a patrimonial heritage: they inherit specific properties that have to be developed through a bi-lateral relationship with their brothers or their nephews, especially when this men are ecclesiastics. From the methodological point of view, this essay demonstrates the necessity to consider all the interactions inside the family group to understand the place of women in such a system.

Beata. A Woman in the History of the Abbey of St Gallen between Remembrance and Oblivion
The article deals with Beata and her family, especially with the donations made by this woman and her son to the monastery of St Gallen (in modern Switzerland) during the 740s. The article explores the possible social and political backgrounds of these grants and what happened to the donated goods during the 8th and 9th centuries. Finally, the article explores the monastic remembrance of donor & donation, which in the case of Beata appears fairly selective.

Women and Family in the Western Tuscany (8th-10th centuries)
This paper analyzes the transformation of women’s role in early Medieval Tuscany between 8th and 9th century. Through the investigation of private charters it is possible to state how women in Western Tuscany changed their action-radius in society as soon as the Carolingian takeover was completed. From the very first Carolingian period onwards, in fact, the explicit and abundant mention of women − which was particularly rich in the previous Lombard period, − progressively disappeared in charters. Particularly striking is the lack of any mention, from the 9th century onwards, of those women who were involved in the administration of proprietary churches and monasteries. Moreover, from the middle of the 9th century on, only the abbesses of monasteries under the control of Tuscan bishoprics are mentioned; finally, genealogical reconstruction of Tuscan aristocratic families of the early Carolingian period are strikingly lacking of information about women. The Author puts all these elements in close relation with analogous phenomena which took place in other part of early Carolingian Europe, where women were forced to play a secondary role in society and within the family.