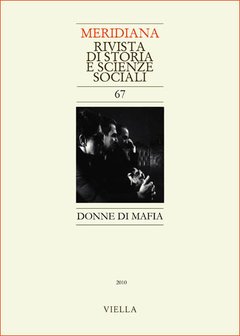 Is there any gender difference in mafia?\ The essay aims at introducing the panel «The women’s places in organized crime of Southern Italy between XIX and XXI century: roles, practices and identities» which has been discussed in the Fifth Annual Congress of the Society of Italian Women Historians in Naples on January 28-30, 2009. The theme of women and organized crime is dealt with by focusing several issues, decisive to gender studies: the relationship with power and violence, the connection with the ideas of tradition and modernity, the hierarchy between the sexes, the role of honor codes. The prevailing approach, including judicial sources and qualitative interviews, is biographical: it allows us to analyze the relationship between the subjects and the group’s constraints, the transformations between long-term practices and arrangements to global dynamics. The essay investigates the tight cooperation between men and women in mafia’s strategies. Such cooperation seems to overcome the gender difference and to confirm generally women’s dependence on their own family embedded in criminal «families», namely organizations equiped by men for violence, that is to say for war.

Trends and perspectives
On the basis of the content of the various articles dealing with the role played by women in the mafias, this essay addresses some of the crucial topics of the current debate. Among these it emerges the relationship between formal belonging to the organization (i.e. the issue of women affiliation, traditionally forbidden) and family belonging to the mafia world, a «world a part» if compared with the overall society. The violence issue, both the one specifically criminal and the one against women in particular, is crucial for understanding the intertwining existing between criminal and daily life within mafia contexts. The contribution provided by turncoats have spread a new light upon these issues, while evidencing the multiple roles and functions played by women. One can often question whether these changes can be conceived in terms of mafia women emancipation’s processes. However, if we consider the substantial subordination suffered by women within this monosexual male world, these hypothesis seem scarcely relevant.

Women, ’ndrangheta, ’ndrine. The Female Space in Judiciary Sources
Women cannot formally take part in the so called «honored society». In other words, they cannot be affiliated through the initiation rite. However, they have been involved in the ŉdrangheta by performing a traditional role – including transmitting mafia values, encouraging vendetta, guaranteeing men’s honour, participating in prescribed marriages – and by carrying out mafia activities. After a brief historical reconstruction of the changes in the ŉdrangheta’s structure, the essay explores the presence of women in the criminal organization by comparing two antimafia police operations carried out by the Direzione investigativa antimafia of Reggio Calabria (Artemisia, in 2009, and Il Crimine in 2010). The analysis brings the author to maintain that women are involved in the ŉdrine – the core of the criminal association based on family groups –, while are absent in the high sphere of the ŉdrangheta power. By describing the numerous and significant roles of women within the mafia families and by observing that women are not allowed to take part in decisional meetings or to assume leadership positions, the essay reflects upon the ambiguities behind the notion of female power in the ŉdrangheta.

Female perspectives from the universe of Cosa Nostra
Starting from the analysis of the important transformations that have characterized the roles of women within the criminal world of Cosa Nostra in the last decades, the article focuses on the dimensions of identity and communication through which the belonging of women to the mafia universe or their exclusion from male territories are defined. In the last two decades, the criminal organization, weakened by the many arrests, has increasingly entrusted to women the responsibility to preserve, affirm and reflect its image of power to the outside. In times of emergency, women are considered the most reliable interlocutors. Using direct evidence, interviews, letters and judicial materials, the article wants to reconstruct the story and the image of the Mafia conveyed by the women who live inside it or who have direct contact with it. The gender prospective emerges from these women’s stories both in the interconnection between personal stories and the mafia tales, both in the use of the words and of the cognitive worlds in which their stories have meaning. A mafia told through the gender’s prism that – in the mirror image comparison with the men narratives – discovers routes and new perspectives to know new facets of a changing world.

«It’s the law that puts women in the middle»: prison, mafia and women
This article deals with the narrations and self and identity representation processes of a group of women detained for serious crimes within the high security section of the Lecce’s prison, interviewed in the framework of a documentary entitled Nella Casa di Borgo San Nicola (Italy, 2008). The role played by women inside mafia groups and, particularly, inside Sacra corona unita, is addressed taking into consideration, beside the scientific literature on the topic and investigative and judicial sources, a visual document which proposes «eccentric» contents, if compared with the conclusions reached by the debate on the topic, and some interventions around the documentary posted on the web. The author deals with three main themes: the issue of prison as a place which is unfit «to treat» women; the issue of the role played by women inside mafia organizations and, finally, the issue related to gender relations. Taking into account the outcomes of the research on the role of women inside mafias and the relevance of direct sources in the study of mafia phenomenon, the author proposes to assume a critic and relative posture toward the narrations and representation processes proposed by these women which allows to identify further approaches toward the topic and to widen critical perspectives usually adopted.

Violent and criminal women in Naples according to the sources of forensic police (1888-1894)
The research proposes to present a perspective of daily violence by women in Naples at the end of the 19th century, traceable from the complete study of the forensic police documents from 1888 until 1894. The detailed archives outline lifestyle and speech patterns which progress from trivial violence through to murderer, correlating with the structured violence of camorra groups. As a result women are part of two worlds, the violent one and the criminal one. In the latter they adopt specific roles, which have not been studied yet.

How Pupetta Maresca rhymed love and honour
The story of a Neapolitan camorrist first lady around the middle of the last century is described in this essay. Pupetta Maresca became very popular during the 1955 war among members of the «Camorra», when, as a very young woman, she killed the killer of the so called «Pascalone ‘e (from) Nola», who was her husband. Pupetta’s life is here investigated till the interview given to the British journalist Clare Longrigg in the nineties. The methodology of this investigation develops three biographical aspects related to three kinds of sources. The debate on the Camorra’s revival after the Second World War with new economical and social characteristics is illustrated. Moreover the essay underlines Pupetta’s «modern» media approach to the penal trial in which she is involved (1955-59), where the character of young widowed camorrist prevails even over the character of Pupetta as a mother. After ten years’ imprisonment and a new sentimental bond, this time to a very violent drug trafficker, the first lady of Camorra will suffer from many frustrations both by her man and by the members of the so called «New Organized Camorra» leaded by Raffaele Cutolo. Even telling the story of her life when she was an elderly woman, Pupetta Maresca confirms the psychological and sentimental characteristics of a cool and determined personality. Her intense report is taken into account focusing on subjectiveness, according to the point of view adopted by Gender History. With respect to the structure of her camorristic personality, it is noticeable her tendency to freeze emotions (even sorrow) and free hate and anger, that belong to the languages of Power.

Criminal Women and Gender Identity
Starting from an extended judicial documentation and reports of the local news, the test analyzes some groups of women active in the criminal traffics in Naples today. The author is concerned with the patterns of gender emerging from the context and their transformations and continuities with the past patterns.

Pink emergency. Data and suggestions about camorra’ women
This paper follows two aims. The first one is to give an estimate of the feminization in the camorra organization and a description of its internal structure, using some data collected and arranged into a relational data-base. The second one is to show some profiles of camorra women, particularly of the so-called capesse. More generally, the aim is to outline the paths of access and rise of the women in criminal networks.

Interest Organizations: from structural differences to practical convergences
In the years of the Second Republic in Italy after 1993 grew up the bipolarism in the political system. The power sfhifts from the old mass parties to leaders of the new political coalitions. The governments, as center-left as center-right, concentrate all important symbolic and material resources. In this context the interest organizations, both employers associations and unions, keep their memebership and their social influence, but they were pressed to have an alignment with the coalition in office. In few cases alternative chance was the political dissent against the governments. All organizations need of the support by governments more than political leaders need them and their consensus.

The inland navigation issue: transport and territorial policies in the Italian economic boom
This article investigates decision-making processes related to the development of an inland navigation transport network in Northern Italy, focusing on the period 1945-65. The transformation of the Po river and other connected rivers and channels into a modern waterway became particularly prominent since the National Unification, with the aim to connect the main cities (Milan, Turin) with Venice harbour and the Adriatic sea. After WWII, the economic recovery allowed to undertake the projects: the inland navigation development was strongly supported at the local level (provinces, municipalities and chambers of commerce), but was not perceived as a national problem, enforcing the gap between the regional dimension and the national one. Furthermore local authorities started to discuss about the track and the priorities in the construction, without finding a common solution. Finally, all these plans were bounded to fail, considering the priority given to the highway development and to the car industry.