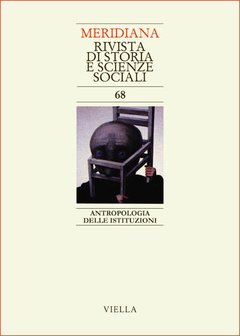 Introduction
The Anthropology of the state and the institutions is presented by the two editors of the present special issue as a peculiar body of interests within the Anthropology of the Politic. The specific objective of this issue of Meridiana is to present the state of affairs in the anthropological studies of governance, governmentality and institutions which have broadly developed in the past two decades. The editors aim at setting forth the strategic aspects of this field of anthropological research that has achieved a remarkable level of coherence in its theoretical frameworks, in its patterns of analysis and deconstruction of political and institutional categories, in its methodologies of approach to the rhetoric, the poetics and the practices of the institutional and political settings. The texts presented here deal with very different institutional contexts: national public administration and political framework, international agencies, non-governmental organizations (anticorruption associations), universities, local and traditional governments, in very different geographical contexts (Italy, New Zealand, Senegal, South Africa, Thailand). The analysis of the rhetoric and the practices is carried out through the particular looking-glass of anthropology showing the various ways in which this field of study may contribute to the contemporary social and cultural research on the politic.

Studying the Global Imagination from an Ethnography of the Unesco WHLs
In this paper I intend to start thinking about what I propose to call GTS (Global Taxonomic Systems): institutionalized taxonomic systems through which transnational agencies shape, and organize a global imagery, acting, as well as tools of planetary governance able to mould attitudes, values and emotions of millions of people. Among these taxonomic systems, the universe of sport, with its world federations, the apparently less formalized world tourism (with its stereotyping and areal specializations), the even widening space covered by the classifications of typical food. These scenarios are united by a cross-border character, by the presence of institutional agencies capable of giving organization in the world through precise taxonomic schemes, and by sharing an often implicit support to – and an equally implicit ability to mould a – «moral economy», a «global hierarchy of values» closely linked to the spread of neoliberal ideologies. Much of the analysis will be carried out, however, beginning with the case of the Unesco material and immaterial WHLs

What is a University For? Public Institutions as Property: Ethnography of University Reform in New Zealand
Over the past decade universities in most countries have undergone a radical transformation as governments have sought to harness education and research to meet commercial goals and national policy agendas. Nowhere are these processes more evident than in New Zealand, a country which has pioneered many of the institutional reforms that were have come to characterize that neoliberal transformation. The «New Zealand experiment», which entailed a massive deregulation, privatization and commercialization of its major public institutions, has brought a fundamental change not only to the character of the university and the way it is managed, but also to the very idea of what a university is for, and who its «stakeholders» are. This article uses the concepts of «ownership» and «belonging» to interrogate the nature of these institutional reforms and their effects. Drawing on recent fieldwork in one of New Zealand’s leading universities, the authors pose two key questions: Who owns the university, or to whom does it «belong»? And what does «ownership» mean in a university context, and how is that ownership symbolized? To examine these themes the authors draw on their ethnographic study of Auckland University, focusing in particular on a dispute over the University’s «Strategic Plan» which, according to its detractors, redefined the Senior Management Team as «the University» and reduced academics to the role of «an individualized proletarian workforce» that must be disciplined and subordinated to an organizational hierarchy of managers». The conclusion reflects on what this case-study reveals about wider patterns of institutional reform in an age of globalization and advanced neoliberalization.

New Public Management and Italy’s «Administrative Southern Question». A case study from Palermo
In the late 1990s, many Italian public administrations were reorganized along the lines of new public management. Almost ten years after that broad process of renewal, this article intends to investigate what is considered an unresolved issue within this administration: its malfunctioning in the South. Departments in Southern Italy are not able to reach the same levels of productivity and the same results as those in the North. By analyzing three different objects – techniques of business planning and system control; conflictual practices playing out in a local office; the public rhetoric with which the successes and failures of the new administrative model are interpreted – the author explores the mechanisms underlying the construction of the idea of Southern «maladministration» in an era of new management. The hypothesis supported here is that the adoption of new public management in Italy has brought about a silent «revolution» in the way of looking at Southern administrations. The new management tools have eliminated the burden for managers to take into account political, social and economic issues as possible reasons to explain the differences between South and North. On the contrary, they focus exclusively on the processes and products of the work, in order to evaluate them solely through statistical parameters and classifications that are considered neutral. Reformulated in this way, the problems present «in» many public Southern departments have become, today, the problems «of» those departments. This is a representation that reinforces the view of many politicians and public administrators who advocate the need to continue on the road of administrative federalism or even secession.

Good Governance and Development: Rhetoric and Practice of New Forms of Power
The article explores how in the 1990s the development international organisations have packaged the political agenda of «good governance» and how this has been recontextualised in Thailand in the aftermath of the 1997 economic crisis, using an anthropological approach for a critical discursive analysis of development policies. «Good governance» is the new development paradigm for the main international development organisations. This is exported in neat policies packages aimed at reforming the political and economic structure of the country in the name of a «good» and fundamentally positive development. In this context in Thailand the concept of «good governance» becomes a sort of panacea, able to explain both the root causes of the crisis as well as indicating the way out. Different political and social actors seize the new policy concept and make it their own, bending it to their political agenda.

Local governance in South Africa. Communal land tenure and traditional authorities: a new «tribalisation»?
The article discusses, in an historical and political perspective, the ongoing processes of transformation in the local governance in contemporary rural South Africa. These elements are analyzed within the wider debate concerning the access to the land for individuals and community and the role of local authorities in the context of sub-Saharan Africa. After presenting the main elements of the debate about the relationship between land and local authorities (elective and traditional) in today’s South Africa, the paper will concentrate on the analysis of the Communal Land Rights Act approved in 2004. The debate about the law is linked to wider issues concerning the strengthening of local governance in post-apartheid South Africa. It raised a wide debate and many controversies in the country about the relationship between democracy and local development, between rural communities and their access to the land, and on the role played by traditional authorities in the administration of the land itself.

The Local Appropriation of Transnational Anti-Corruption Policies: Brokers, Civic Movements and Good Governance in West Africa
In Africa, the transnational good governance policies have given birth to several local NGOs playing a role of watchdogs and claiming to work for improving accountability and transparency in national governments. Through an ethnographic description of the practices and of the specifical modes of networking of the Senegalese chapter of Transparency International, this paper will focus on the processes through which these civic movements act as brokers between donors, foundations, international NGOs and the local society. Far from being merely translators of neoliberal rationalities and techniques of governance, they re-interpret the international norms of anti-corruption and participate in the local and national political debates.

Mafia women: a history of representation and self-representation on the Italian press
This article investigates how the Italian press of the Sixties and the Seventies has represented the Sicilian mafia women and how the mafia women have represented themselves. In particular, it will focus on the descriptions of the familiar contexts in which these figures have to live and the ties of blood emerged from the pages. The woman is described from the press always as the female part of a gender relation: she is a mother, a sister, a wife of a male counterpart strictly connected with her. At the same time, also the self-representation from the women themselves seems to follow this familiar red line and it is often used to lighten her position during the trails or when she is speaking with the journalists. As it will show, this bilateral connection between the press and the mafia women and this particular point of view (the familiar one) is a constant in the history of the gender crime representation after the Second World War.

For a Digital Republic of Learning
The article discusses the opportunities which the web 2.0 is offering to the scientific community. Taking the idea by the Robert Darnton’s The Case of Books, Di Gregorio calls into question whether the internet’s contribution to a new era of information will be instability and volatility or, rather, new prospects for a more diffuse learning. Beyond the more common case, that is if the book will ever be replaced by its digital equivalent, the key question concerns more specifically the Google’s digitization project of the libraries, therefore the real risk of a digital monopoly on the «Republic of Learning».