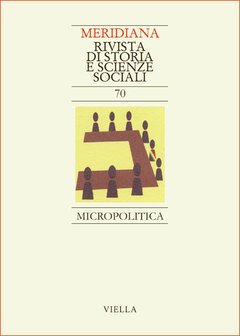 New consensus strategies in Naples. The political class in the municipal decentralization
This contribution analyzes the crisis of the political system in Naples and the emergence of new consensus strategies at the territorial level. We develop the argument on two dimensions. First, we examine the process of personalization and professionalization of the political class at the grassroots level and the increasing fragmentation of the parties. Second, we focus on the difficulties in the decision-making processes at district level. As a result of the crisis, we note a tendency to the concentration of the electoral consensus of the municipal councillors in restricted territorial areas.

The Outsiders and the Established: the case of Forza Italia in Salento
Forza Italia appears on the Italian political scene with an insistent antipolitical rhetoric. The party pretended to remove the old professional politicians and renew the political staff, but it soon had to resort to preexisting political mechanisms and to old professional politicians, arising disappointment in those who approached politics for the first time. This essay focuses in particular on Forza Italia in Salento and it will trace the events leading to the genesis and development of the local party. Forza Italia in Salento was the centre of a conflict between experienced and rooted political professionals and outsiders with little experience in politics. Forza Italia represented (for both categories of politicians) a chance for a political career, though to be understood in different ways. Each of the actors reported to different groups who were united by common interests and who shared similar representations of reality, although with unequal chances of power. In the long run, the outsiders less experienced and holding less chances of power, had to conform to the attitudes and behaviours of the old, established politicians. Those who wanted to migrate from the status of outsider to that of «root», were forced to fit to the practices and vision of the much criticised old professional politicians.

Playing politics in Catania. The «Movimento per le autonomie»: relationships of dependence and cultural intimacy
The article deals with the issues of political participation/mobilization in the city of Catania and its territory, with particular reference to the Movimento per le autonomie (Mpa), a young political entity which has had significant electoral success. The political activity carried out by leaders, activists and members of the party is studied taking into account the main categories which have characterized the debate on political phenomena in Southern Italy - first of all the concept of patronage. Nevertheless, the relationships of dependence observed during the fieldwork are taken into consideration together with the role played by cultural factors in the choices operated by the grass roots. In accordance with the theory of «cultural intimacy», such choices are in fact strictly connected with a local (culturally institutionalized) way of playing politics that they contribute to build.

The Notables of Republican Italy
According to the prevailing view, notables and mass parties are incompatible. Conventionally, a notable is a politician whose political capital consists of the position of social authority and prestige he occupies. Drawing on the case of Republican Italy, this paper suggests, instead, that conventional notables could easily adapt to the so called party democracy. On close examination, it seems also that national and local professional party politicians frequently accumulated a personal political capital to advance their fortunes within their own party. Finally, the paper brings to light cases of social notables who consolidated their personal political capital thanks to their long lasting political career. All these cases, drawing as they do on particular social and political contexts, are extremely different. This is not surprising if we keep in mind that the notable is just an ideal-type.

Rediscovering the territory: population size of municipalities and electoral behaviour in Italy
This article aims to rediscover a variable that has been rather neglected by the Italian electoral studies on the so called «Second Republic»: demographic size of municipalities. Is there a difference between a citizen who votes in a small municipality of North-east and another one who votes in Milan? Between voting in a rural village or in an urban metropolis? In other words, is territory – considered as centrality or peripherality of the municipality where vote is cast – important to understand Italians’ electoral choices? And if so, how much it matters? May it even become a decisive dimension for the electoral results? Moving from these questions, the article analyzes the results of 2008 Italian general election by dividing the more than 8.000 Italian municipalities in 5 classes of demographic size (0-5.000, 5.001-15.000, 15.001-50.000, 50.001-100.000, above 100.000) and the territory of our country in 4 geo-political sub-units (North-west, North-east, Red belt and South) in order to develop a complete mapping of the incidence of demographic variable on the vote. This study concerns the 2008 vote to main Italian parties, coalitions and electoral blocs and uses the analysis of variance to calculate the tightness of the association between the above variable and the vote through a synthetic index. The findings are very interesting and in some ways surprising. Demographic size matters, especially in some areas (North) and for some parties (Northern League, Pd, Udc, Idv). In particular, three possible behaviours occur: some parties, definable as «city oriented», tends to achieve increasing electoral results whenever the size of municipality grows (eg. Pd, Idv); other parties, labelled as «village oriented», show an opposite trend, that is strongly rooted in small towns and a systematic loss of votes when demographic size increases (Northern League, Udc); the third type of behaviour is given by some «all around» political forces (Pdl, La Destra, Mpa) that show indifference to the variable. An even more pronounced effect could be found in coalitions and blocs analysis, with the centre-left collecting a strictly urban vote and the centre-right stronger in small towns.

The ways of the decline of a representation model: the southern political class in the governments of the Italian transition
This article aims to describe and analyze the relationship between national government and territorial representation during the so called Italian transition. In particular, after a period of about fifty years (1946-94) during which a kind of «Southern hegemony» based on individual and electoral responsiveness was consolidated, the main research question that needs to be asked is: what were the subsequent developments which characterized the period from 1994 to the last government led by Silvio Berlusconi? More specifically, how did Southern representation evolve? Did new sub-cultural hegemonies arise? Did significant changes occur between coalitions of new bipolarism? Examining the evolution of government’s parliamentarization as well as that of the biographical sketches of the members of government, we find a sharp decline of Southern representation associated with an as much sharp decline of traditional representative model based on responsiveness. This result associates centre-left and centre-right coalitions, even if through rather different ways.

Not only «places». The «times» of the development in Southern Italy and in Sicily
For Southern Italy the last six decades (1950-2010) were marked by «development without autonomy», since no reduction of the GDP gap with Northern and Central Italy has been achieved. The aim of this paper is to identify, within this space of time, which periods were characterised by «development with autonomy»: economic dynamism, reduction of the gap with the rest of Italy due to the growth of wealth and productive labour. Analysing the territorial differences within the «Mezzogiorno» – finding the «places» where local endogenous development occurred – is a useful task: at the same time, identifying the «times» of the autonomous development is also crucial. The paper tackles the issue of the availability of local data and historical series useful for the referred analysis. As a result, the 1950s and 1990s provide evidence of discontinuity from the long-term trends and show the nature of the independent, autonomous development. The in-depth analysis of such «times» and «places» is the key (the «possibility», as Hirschman would have said) for rethinking and planning new forms of territorial cohesion.

The Venetian Workerism between modernization and conflict
The purpose of this work is to analyse the characteristics of the Venetian Workerism during the Sixties and the Seventies, its slogans and its collective rituals. At that time, crucial for the creation of a substantive democracy in the country, the trade-union and political choices of the left-wing organisations, as the Cgil and the Pci, were debated by new extra-parliamentary groups such as the «Potere Operaio», which soon turned into a left-wing political movement particularly influential. A characteristic of this extra-parliamentary extremism was a widespread violence wiped out by the process on April the 7th, that after 30 years continues to recreate a divided and opposite collective memory.

Uncivil Society
Uncivil Society by Stephen Kotkin focuses on the meaning of «society» in Eastern Europe – and particularly in East Germany, Romania, Poland – as an actor or as an outcome in the breakthrough or implosion of the Communist establishments. This is an important contribution non only on the events of 1989, but also on uses and applicability of a long discussed historical concept (civil society) and of a model of social and political change.