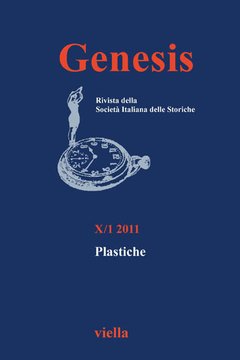 Order the body according to the measure. The definition of the boundaries of identity in the Pythagorean female imaginary
Starting point of this essay are some texts included in the book of Holger Thesleff, The Pythagorean Texts of Hellenistic Period (1965), which are attributed to women philosophers (whose names are Theano, Melissa, Periktione, Phintys) and that highlight how important was in ancient Pythagoreanism not only human bodies generally, but also female bodies. Even if silence was an high significant value, above all for women, Pythagorean “women” philosophers talk with us, by their letters and fragments, about the essential rules to use bodies properly (the right way to dress, comb and make up, which is the correct behaviour to follow and the healthy nourishment to eat), giving us the possibility to define their identities boundaries and the social role they had within and outwardly the oikos.

The origins of plastic surgery: practice and standards of female beauty in the Libri dei segreti and treatises of the sixteenth century
A wide range of Libri dei segreti and treatises on female beauty and behaviour produced during the XVI century provide accounts regarding physical alterations, cosmetic treatment and behavioural rules which challenged conventional views. These sources open up important paths of inquiry and understanding for anyone concerned with the perception of both female body and behaviour in daily life in sixteenth-century Italy. It is through these texts that we can begin to develop a fuller picture of the prominence given to physical beauty and its connection with the practises that aim to make the body beautiful following the canons of that time. Passages which deal with female beauty and behaviour indicate the different ways in which social conventions and rigid prescriptions contribute to the construction and display of the ideal female body.

“Designer vagina” imagery of indecency or return at the age of innocence?
“Designer vagina” or Female genital cosmetic surgery (Fgcs) procedures have gained popularity in the West, also in Italy, in recent years and reveals an interesting anthropological field to understanding the social construction of gender and sexuality. Designer vagina was framed as enhancing female sexual pleasure, or specifically orgasm. In this paper I propose a critical itinerary on the Fgcs and the challenges posed by the idea of body-modification. I argue also that the focus on female sexual pleasure functions to legitimate and promote the designer vagina. The surgeries are more dangerous than the glossy advertising and glowing testimonials suggest because the woman through Ceigf undergoes irreversible modifications which are not evaluated the consequences on health and social responsibility.

Plastic Body: the metamorphosis of the body in ORLAN’s art
In this article, we are going to analyse how contemporary art and the common use of aesthetic surgery have normalized and brought into question aesthetic norms, gender roles and self-perception. After the experiments of Body Art in the Sixties, some artists have been doing even extreme and more provocative investigations on the body, leading to new ethical implications. A key example of this was the use of plastic surgery in an artistic performance for the first time in 1990 by French artist ORLAN, which was perceived as outrageous at the time. Analysing her use of plastic surgery in art and, at the same time, the contemporary wide use of aesthetic surgery in different social classes we query if these technical progresses free ourselves from the constraints of nature or, on the contrary, enslave us to an unreachable idea of beauty. What about the intrinsic fragility and diversity of the embodied condition of our humanity?

Nose and Freedom. The Nose Job Obsession in the Islamic Republic of Iran
Rhinoplasty rates have been rising dramatically in Iran. Does the nose job constitute a challenge to the authorities or is it a mere desire to imitate Western beauty models? Many observers say it is due to the constriction of the veil that converges the gaze focus on the face, therefore women try to have it perfect. If this is the case, why do many Iranian men want to have they nose reshaped as well? The article explores the possible reasons for this amazing phenomenon and places it in the history of the changes beauty canons underwent in Iran. It also discusse whether the nose job obsession is a form of women’s empowerment, or, rather, of the latest example of their bondage to fashion.

Desires of whiteness. The cosmetic depigmenting among African women in Italy and Congo
The cosmetic use of skin whitening substances (mercure, hydroquinone, steroids) by African women has been supported with documentary evidence in various research works which disclose its health risks. However research works which deal with social and economic repercussions of the issue have been reported to a lesser extent. I interpret my study as an attempt to investigate these aspects which implicate the social building of beauty as a concept and its representation. The following data have been collected in Italy and the Congo RDC by means of inspections carried out in Italian ethno-cosmetics shops, and Congolese markets and by interviewing immigrant women in Italy as well as both men and women who make use of skin whitening products in the Congo as well.