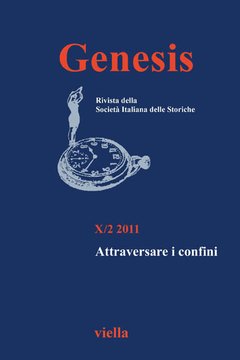 The invisible color line within Italian feminism: journeys, translations, driftings
The relationship betwen gender, sexuality and politics is today being radically reconfigured by processes of globalization, migration within and outside Europe, as well as by the emergence of new political subjectivities. By calling into question the relationship between political practices and memory, black and postcolonial feminist theory push for a reopening of the historical archive of the feminist movement. This article explores the potentialities of a work of research and historicization on the invisibility of the color line within Italian feminism starting from two different directions of research. Both focus on questions of cultural translation in relation to transnational networks and exchanges between the two sides of the Atlantic, as well as around the colonial and postcolonial boundary. The first direction is represented by the relationship between the recurrent reference to anticolonial and Afro-american movements within the texts of early Italian radical feminism and the invisibility of the position elaborated by black feminists. The second discusses the link between experiences of political migration in Africa and feminism and focuses on Maria Rosa Cutrufelli’s case, where the link between personal and political as well as between different geographical and political spaces is crucial. Federica

Transatlantic connections: lesbian feminism during the 1960s and 1970s
Translations of early essays by Usa feminists circulated in Italy between 1970 and 1972 inspiring the consciousness raising practices that shaped the early feminist movement. This essay looks at the beginnings of US lesbian feminism in terms of the difficulties experienced by lesbians with and within women’s groups. Some of their documents were also imported and circulated in Italy providing guidelines for the budding G&L movement which continued to define itself as feminist or feminist-friendly despite the lack of acknowledgement from the women’s groups of those years.

Psychoanalysis and politics between France and Italy
Between 1971 and 1972 Italian and French feminists met and lived together in a week long camp. The core of the encounters was the creation of a new conception and practice of “politics”, intersecting body and language, fostered by the “Psychanalyse and Politique” collective. Going back to reports of the event and considering some later historical reconstructions, the essay presents both the general questions at stake and the voices and positions of the participants, who quickly became the principal referents of the different feminist political and theoretical options in France and in Italy: Antoinette Fouque, Monique Witting, Luisa Muraro, Lia Cigarini, Lea Melandri.

Comrade Woman/Drugarica Žena: the Belgrade international conference of 1978
The international conference Drugarica Žena. Zensko Pitanje: Novi Pristup? (“Comrade Woman: The Woman’s Question: A New Approach?) was organized between the 27th and the 29th of October 1978 at the Belgrade Student Cultural Center (Skc). The conference is seen as the founding event of second wave feminism in the post-Yugoslav region, and is still remembered today through meetings, publications and commemorations. Beside its importance for the local feminist scene, the conference also became a site of transnational discussions between Yugoslav and Western European feminists, who compared notes on women’s lives under socialism and under capitalism. This article reconstructs the encounter between the Yugoslav organizers and the Italian guests, by analyzing the different political contexts and the different feminist languages adopted during the meeting. It relies on the reports published in the feminist press after the conference, as well as on archival material and oral history interviews. The essay also contains some transcripted excerpts of an original audiotape recorded in Belgrade, in which Italian feminists present themselves and their political experiences, assessing the subjective and intersubjective changes brought by feminist movements in 1970s Italy.

Intellectual, nomad and polyglot: a Hungarian witch and Italian feminism
This article focuses on Agnes Hochberg (1964-1995), a feminist and scholar, engaged in the Hungarian feminist movement since 1990 and, in the meantime, in a research project on the history of the Italian and American feminist movements of the 1960s and 1970s, focusing in particular on the practice of consciousness-raising and the ways in which it was transmitted from one country to another. An analysis of her work is useful to look in a critical way at our approach to the history of neo-feminism, and to rediscuss methodological categories such as “transnational feminisms”, and the periodization of feminist movements.

Sometimes she returns. Monique Wittig and Italy
The article reconstructs the impact of Monique Wittig’s writings in Italy. It highlights the constant removal of a passionate way of thinking characterized by an unwillingness to mediate, which re-surfaces after generations at a time when a new rigid counter-code is appearing in feminist and post-feminist debates. Wittig is a figure of excess, an extraordinary creator of linguistic inventions, who revolutionizes languages and syntactic structures, mixes literary genres, destructures political axioms. She is loved and hated with the same polemic ardour. Yet, even when all traces of her writings seem to have been lost, she inevitably returns.

The world in a cage? Promises, disillusions and conflicts around the UN Conferences on women
While reviewing the history of the Un Conferences “on” and “of” women, I shall try to recall perceptions of new openings but also feelings of closures: images of “the world as space” which fed the hopes of those who travelled to Nairobi, Cairo, Beijing, New York; the longing for discovering other possible feminisms, but also the difficult negotiations with the bureaucratic language of global organizations. At a time when the idea of collective subjects was disrupted, women from all corners of the world were shaping and reshaping transnational networks displaying constructive and as well as destructive behaviors. Issues like the very meaning of “bonds”, “solidarity”, “aid” were discussed while the traps of linking through the borders of differences (often not acknowledged) were experienced. There were those who saw the Un conferences as “bureaucratic cages” which could empty and weaken women’s movements through coopting their issues. But different stories can be told.