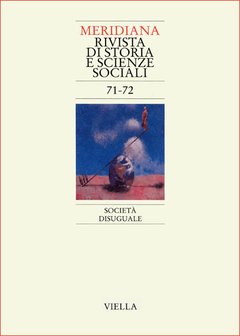 Persistent or Temporary Inequality? The role of working time
By using the longitudinal data from INPS (National Social Security Institute) it is possible to look beyond the mere changes in the cross-sectional inequality and to give some other explanations of the changes in earnings inequality over time. The main aim of this paper is indeed to investigate the earnings dynamics in Italy for the period 1992-2002 decomposing the earnings inequality into its persistent and transitory parts. The first one is mainly related to changes in returns to individuals’ unobservable ability while the second one reflects mostly year to year fluctuations often related to market instability. The analysis focuses on earnings dynamics of male and female employees aged between 25 and 54. Furthermore, it takes into account the potential role of the working time (i.e. yearly working weeks) on the evolution of permanent and transitory earnings inequality.

Beyond human capital: wage inequality and the mechanisms on the labour market
The economic literature devoted several studies on identifying determinants of wage inequality, focusing, in particular, on the rise of wage gaps between high skilled and low skilled workers. Focusing on this gap implies taking into account only the inequality «between» workers that differ in terms of educational attainments and, hence, overlooking the wage inequality observed «within» equally educated workers. The main aims of this paper are to compute, by means of inequality indexes decomposition and carrying out wage equations, the role played by the «within» inequality component in Italy and in EU15 countries and to identify possible determinants of the wage gaps among individuals equally educated, including contractual arrangements, family background and some factors affecting individual abilities over education.

Overeducation in Europe and in Italy. Do we have to take it seriously?
Overeducation can represent a symptom of a serious disequilibrium in the accumulation of human capital, one of the drivers which led the economic growth of advanced countries since their earlier industrialization and one of the main factors which are expected to sustain the growth in the next future. On the theoretical level various explanations of overeducation have been advanced, while empirical research points out a number of factors contributing to determine it in the labour market, but information and methodological limitations have not allowed until now to reach any conclusive results. This paper draws information from existing studies and from some original estimates providing comparative data on the diffusion of overeducation in the European countries to put in evidence a few stylized facts on the incidence of it and to gain insights into the relative position of Italy among them. The Italian case stands out as the level of education of its labour supply still lags behind that of European partners while the incidence of overeducation is well above the European average. A tentative interpretation of that paradox is drafted on the basis of results and suggestions derived from the body of available literature.

The leisure time of the poor and the rich: causes and consequences of a neglected issue
Some studies on inequality have taken into account the multidimensionality of individual well-being. Nevertheless, few studies have paid attention to leisure time, despite its indisputable influence on well-being. The first goal of the paper is to shed light on the empirical evidence on leisure time distribution and its relationship with income; an evaluation of whether the former is correlated with income distribution, compensating for or magnifying income inequality, will be proposed. The paper will also provide an explanation of the socio-economic mechanisms and the incentive system behind the evidence on leisure time distribution and its evolution in the last decades, drawing on the theories of Veblen, Gershuny, Becker and Scitovsky. The second goal of the paper is to consider how individuals endowed with different incomes allocate their leisure time among different activities, taking into account that they may also differ in terms of life skills. The latter represent the individuals’ cultural capital and play a fundamental role in shaping individual decisions about how to use leisure time, which in turn produce non-negligible «social externalities». In this framework, an analysis of the implications in terms of individual and social well-being of different distributions of leisure time among income classes will be put forward.

Intergenerational transmission of inequality: so many subtleties on the ground
This paper provides a compact survey of relevant strands of literature on intergenerational transmission of inequality and social mobility. Some important empirical results are shown to capture the stylized facts the theoretical literature tries to deal with. Hence, the basic theoretical framework used in this field (Becker and Tomes, 1979) is presented, highlighting the underlying assumptions and pointing out the critical points. The main aim is to propose (for future research) new theoretic arrangements to cope with the empirical evidence: removing some restrictive ad hoc assumptions, enhancing the role of preferences, considering the importance of relevant macro variables and trying to handle the positive relation between intra-generational income inequality and inter-generational elasticity of income.

Inequality and network effects
Inequality among individuals has many causes and dimensions, the most studied source is family background, the intergenerational transmission. Family transmission may be seen as a one-to-one channel through which parents transmit a multidimensional input to their sons but it is easy to image a richer and more biological mechanism. Interactions among sons can be added to this framework, the intragenerational transmission. People interact and influence each other during decision making process, in particular these peer effects take place in educational path. Considering a network model presents many advantages in terms of identification strategy and economic concept. Social context, here identified through networks, has an important role in determining educational outcome, an important determinant of salary and work satisfaction level. A stronger effect for older students in the high school suggests a deeper influence among people when moment to decide is coming.

Beyond the homo oeconomicus. A critical analysis of the inequality aversion hypothesis.
The article deals with the study of individual attitudes towards inequality and in particular the presence of possible forms of aversion against it. The research in this field share the rejection of the homo oeconomicus hypothesis and ranges from laboratory experiments – typical in behavioural economics – to the empirical studies of welfare economics and those more recent based on happiness and life satisfaction data. Despite significant differences, both the experimental and the empirical evidence show that the inequality aversion hypothesis is feasible. Some subjects are willing to give up their material reward in order to move in the direction of a more equal society whether in presence of disadvantageous or advantageous inequality. This evidence raises a question: why do high real inequalities coexist with widespread forms of aversion to them? Several possible answers exist. However, particularly relevant is the idea that the analysis of individual attitudes towards inequality cannot be focused only on the results – like all the experiments and the empirical studies do–. The procedures that lead to a certain result need to be taken into account in order to complete the analysis. Due to their consideration the more general hypothesis of inequity aversion could be put forward instead of the inequality aversion one.

Factories of knowledge. The ambivalence of cognitive work
The article seeks to identify the tensions caused by the changes in the work processes caused by the so called knowledge economy. The article analyzes the increasing involvement of local networks and cultures, socialization processes, intellectual and emotional attitudes of individuals in the production cycle, and the centrality of knowledge in the production process, trying to figure out if these processes increase the subordination of individuals and workers or the autonomy of workers and social actors. The final thesis is that knowledge economy is a field marked by a dialectic between economy and society, in which the first, in order to incorporate the potential economic value of mechanisms that arise in the second, must incorporate individuals, practices and cultures that are partially conflicting with the mechanisms of accumulation, having to make increasing efforts to bring the whole process to the ownership regime.

Water Market. Politics, Institutions and Conflicts in Bagheria Citrus District (20th century)
In the 19th century, in the countryside of Palermo, water had a market price and was even used as an instrument of threat to control the territory. In the beginning of the 20th century, the landowners of Bagheria decided to create an irrigation union. The association wanted to free the peasants from the monopoly system and criminal control of resources. At last, citrus production increased; in the other side the new water management strengthened the dominant groups and did not reduce social conflict.