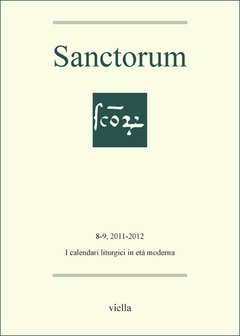 Liturgical Calendars from Pius V until Benedict XIV: the requirements of universality versus the construction of localism
Pius V’s revision of the Roman Breviary reduced the number of feasts in the sanctoral by a large number. But both religious orders and dioceses kept their own feasts, whose number grew during the following two centuries, a phenomenon whose existence is witnessed in the archives of the Sacred Congregation of Rites. It was this body – at least in theory – which was required to approve liturgical calendars, whether to grant precedence to the feasts of the Universal Church or to allow the celebration of local feasts. Religious orders sought to preserve the memory of all the saints and blessed which had lived under their rule: such a practice of consistently adding names to their calendars necessitated periodic revisions to the whole calendar to provide a better distribution of the varied requirements to celebrate the feasts adequately. Since the existence of Propers particular to each diocese was not considered in the Roman norms, bishops took care to establish a calendar which would be observed throughout their own territory, and in which saints from the first centuries of Christianity in the area and those whose relics had been procured (even within the very recent past) were both given a place. Imbued with pastoral concerns and sensitive to developments in pietistic devotion, diocesan calendars are less stable that those produced by religious orders. Setting aside the differences between these two types, these calendars give an important role to secondary feasts (especially those for the translation of relics), and provide, as they were always badges of identity and belonging, a means of individualising the celebration of the saints.

The diocesan liturgical calendars in the post-Tridentine France: evolution and transformations (1570-1680)
As an indispensable tool to organize the recitation of canonical hours, liturgical calendars evolved throughout the seventeenth century, in both form and content. Taking into consideration over more 110 books printed in France between 1570 and 1680 which contain a liturgical calendar, this article offers initially a broad view of the different types of works published, followed, through concrete examples, by an analysis of how the calendars evolved. Whilst the spread of Roman liturgical reform may explain a large number of these transformations, nonetheless each diocese retained their own singularity in the interpretation of this reform. The mapping of the results leads to an awareness of different reactions on the part of individual dioceses to reform, and thus, the Roman influence on French diocesan liturgy may be presented as a complex phenomenon in which each entity retained their own identity.

An inconvenient holiness: the Canon Missae saints in the 18th century French diocesan calendars
Between the end of the Seventeenth Century and the French Revolution, numerous diocesan breviaries and missals were published. Those who planned these works often began them with a revision to the liturgical calendar by unanimously adopting several principles: priority accorded to local saints, restriction of “Roman” saints, suspicion towards saints of doubtful pedigree… Nevertheless, these principles seem to have been contradicted when it came to the saints mentioned in the Canon of the Mass. Despite their presence in the most sacred part of the Eucharistic ritual, these saints did not have legends consistent with the hagiological criteria employed by the the liturgists concerned. This paper aims to analyse how they resolved the dialectic tension between tradition, faith and historical criticism brought about by the ambiguous epistemological status of these saints.

Santa María de Valvanera: the Origins, the Legendary Founders and the Ethos of a Northern Spanish Monastery
Anthony John Lappin

Santa María de Valvanera: the Origins, the Legendary Founders and the Ethos of a Northern Spanish Monastery
The genre of the monastic exordium exists as a half-way house between the writing of history and hagiography. In the present example from the Riojan house of Santa María de Valvanera, the Istoria fundationis Sancte Marie de Vallis Venarie, further complications arise: the narration is extant only in a fifteenth-century Latin translation of a thirteenth-century vernacular source, already distant by over a century from the events which it purported to narrate; and the narration – if approached as strict history – displays a number of symbolic elements (both Christian and possibly pagan) and of contradictions with other parts of the monastery’s written record. These conflicting stories, rather than completely disallowing the Istoria’s narration, allow us to grasp how the medieval monastery understood itself, and to perceive the exordium not as a sequence of half-formed hagiographies of little historical value, but rather as a means of specifying the spiritual ethos of the monastery itself.

Santa Rosa of Viterbo: the mistery of her heart
This article is the result of a collaboration between a pediatric cardiologist and a historian, whose common interest in Rosa, whose life was witnessed in the first half of the thirteenth century in Viterbo, and in whose city there is still held the annual celebration in her honour featuring the celebrated “macchina”. Santa Rosa’s body has been the focus of a persistent devotion, and it is preserved entire in the Monastery of Clarisse. Analysis of her body has enabled the identification of a congenital malformation of her chest and heart, which has led us to change our interpretation of Santa Rosa’s life. This new finding brought the authors to reexamine the historical sources in order to gain a new outlook on her life and search for a relationship between physical illness and spiritual experience, allowing her illness to emerge as a defining element in the spiritual life of Santa Rosa.

The Tree of the Mother of God
The iconographic composition, portraying a tree that bears the Mother of God at its top is a relatively late modification of the compositon, “the Tree of Jesse”. It appeared in the iconography of the Western Middle Ages and the beginning of the modern era in connection with the developing idea of the Immaculate Conception of Mary and of Mary’s special role in history. The foundation for the composition of the Mother of God as a tree that gives fruit to the Christ is the ancient Akathist hymn of Byzantine liturgical tradition. In the fourteenth century a new Akathist hymn to the Dormition of the Theotokos was created called the “Tree of Life”, marking a new phase in Byzantine Mariology. In Rus’, the need to glorify the Theotokos through her miraculous icons invoked parallels between the sixteenth-century icon of the Mother of God with the Child and the Tree of Life. A grandiose expression of Mariological theme in the Russian icon is Simon Ušakov’s depiction of a tree that rises from the Cathedral of the Dormition in the Kremlin. On top of this tree is not Mary, but her Vladimirskaja icon, which by that time had become an object of veneration by the whole Russian Church for its salvific role in the history of Rus’. In the floral motifs of the cartouches of the work are symbolic references both to the Virgin Mary and Christ.

The medieval Vitae of Francis of Assisi as presented in the Acta Sanctorum
In 1768 the bollandist Costantine Suyskens publishes in Antwerp the hagiographic dossier of Francis of Assisi within the second October volume of the Acta Sanctorum. This is a voluminous work which represents the first step in producing a scholarly approach to the sources of the hagiography of St Francis, nearly 130 years in advance of the publication of the famous Vie de S. François of Paul Sabatier (1893). The hagiographic dossier of Francis of Assisi is one of the finest products of the whole collection of the Acta Sanctorum to arise within the new demands of eighteenth-century culture. The introductory study penned by Suyskens, S.J. confirms the depth of the Bollandists’ scholarly project, and its value increases when one considers both the complexity of the documentation and the implications for the delicate relationships between the various religious orders, only few years before the suppression of Society of Jesus (1773). This present contribution (part of a larger research project) focuses on one of Suyskens’ most important and original works, namely the preliminary study he conducted on the Franciscan hagiographical sources (from Thomas of Celano to Luke Wadding). The results of this enquiry came together in the first part of Commentarius praevius aimed at providing a new biography of the saint which occupies the rest of his commentary. We highlight some features of the Bollandist’s methodology – means of gathering information, the criteria by which sources were both selected and evaluated, together with a few examples, allow one to observe the practical use of medieval vitae within this eighteenth-century reconstruction of Francis of Assisi’s biography.